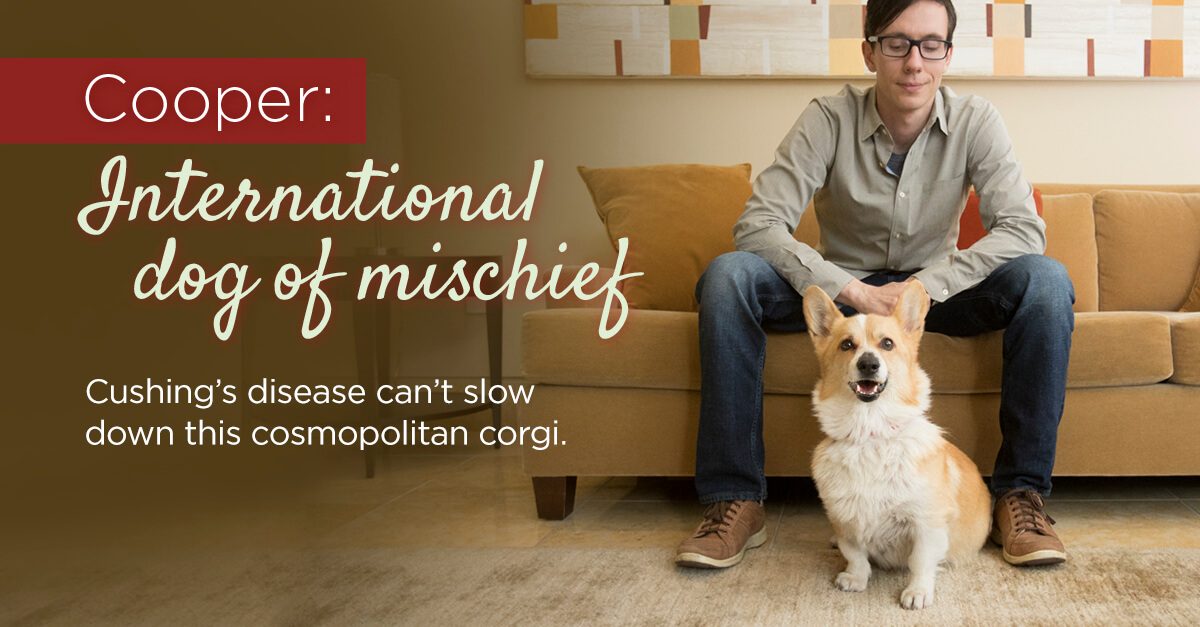 In the hierarchy of internet cuteness, corgis have certainly earned their spot at the top. Nationwide member Rudi Wills tends to agree; all it took was "one video of a corgi jumping out into the water with their small, stumpy legs" to get him "completely enamored" with the breed.

Though he previously considered himself a cat person, Rudi has become a dog convert thanks to Cooper, his intercontinental corgi companion.

"In about the seven years that I've been with Cooper, we have moved country four times," Rudi explains. "I travel a lot with my work. It's been a lot of life changes for me, so it's been very comforting to have the stability of having Cooper constantly be by my side as I've been moved around."

Born in Norway, then having lived in Spain, London and now San Francisco, Cooper is quite the multilingual world citizen.

"Cooper grew up in Norway. We lived there for the first year of his life, so all of his commands are in Norwegian," says Rudi. But, he says, the intrepid pup has learned a little of the native tongue in each place they've lived—at least the important words, anyway.

"He picks up a little bit of the local language, the things that pertain to what he cares most about," says Rudi. "Like playing or eating."

Priorities, right? But Cooper's talents extend beyond just his knack for languages.

"One time around Christmas, we'd left a toy wrapped for him beneath the tree, and he'd left it alone for days," recalls Rudi. "But one day, he decided it was enough, so he just ran straight over to the tree, picked up the toy, and started unwrapping it."

"He's very methodical about it. He doesn't chew up the paper. He rips it off and puts it to the side until he has the toy by himself," Rudi continues. "So, a couple of months later, around February, which is his birthday, we decided to throw a party where everyone could bring him a wrapped toy. A bunch of our friends came over with wrapped toys, and we all watched him unwrap these presents."

His goose was cooked

Cooper's holiday hijinks didn't end with his preview of the presents under the tree. His next Christmas caper was so memorable, Rudi and his girlfriend, Gina Reams, simply refer to it as "the goose story."

"We decided to have a Christmas party for our friends and have them over and cook a goose," says Rudi. "After we took it out and I put it on the counter to cool off for a while, it started dripping fat on the floor [but] we didn’t really notice it because we were entertaining and talking with our guests."

"It was a very, very fatty bird," Gina adds for emphasis.

Amid the festivities, the couple noticed that Cooper had gone mysteriously absent—and soon found him, predictably, in the kitchen.

"He was rolling around on the floor in the goose fat," says Rudi. "His face was, like, just entirely covered in the stuff."

Though Rudi and Gina wiped him down as best they could and later took him to get bathed, he "still continued to smell vaguely of goose fat," Gina says. "For, like, months."

While they're able to laugh about it now, the goose incident caused quite a scare at the time.

"Gina was very worried about him initially because we weren't sure about how much of it he had actually ingested, versus how much was just on him from rolling around in it," Rudi says.

"I was freaking out because I was like, 'He could get acute pancreatitis,'" explains Gina. "I'm kind of obsessive about that...I'm, like, helicopter dog parent."

Fortunately, aside from the lingering bouquet of eau de goose, Cooper didn't suffer any ill effects from those few minutes of greasy revelry. Instead, his biggest scare was still to come.

'If in doubt, scope it out'

Last summer, Rudi and Gina began worrying after they noticed a significant amount of blood in Cooper's stool. X-ray and ultrasound exams eventually revealed that a large, indigestible mass was blocking his intestinal tract and needed to be endoscopically removed.

“My theory is that he'd swallowed a bit of [toy] stuffing and then other stuff... So I think that had just served as a starting point and then other stuff had gotten stuck in that," Rudi surmises. "When they pulled it out, it [didn't] really look like very much, like anything in particular. It was just, like, a mass of stuff."

"They gave us a little USB pen [of pictures] with their logo on it," Rudi says. "And their slogan, which is, 'If in doubt, scope it out.'"

During Cooper's ultrasound exam, his veterinary team noticed an anomaly unrelated to the foreign body obstruction. That finding, coupled with some behavioral changes Rudi and Gina had been noticing, led them to pursue additional testing that brought more challenging news.

"He was drinking water excessively. He was having accidents inside the house, which was very untypical for him," Rudi says. "After having run a few tests at the doctor, he was actually diagnosed with Cushing's and has been on treatment ever since."

Between Cooper's foreign body procedure and his Cushing's diagnosis and ongoing treatment, Rudi was hit with a double whammy of unexpected veterinary costs. But as luck would have it, he had signed up for Nationwide pet insurance through his employer's voluntary benefits program not long before everything happened.

"I had been a little bit hesitant about getting insurance for Cooper because he's been very healthy up to this point," explains Rudi. "But I figured at the age range where he's transitioning into becoming a more mature dog, it was about time that we settle on some insurance for him, just in case anything happened. And then, thankfully, we got it before he fell into some problems."

Thankfully, indeed. Cooper's foreign body incident cost more than $5,000, but Rudi was reimbursed $4,800. But while that was a one-time ordeal (hopefully), the Cushing's disease treatment will be an ongoing expense for the rest of Cooper's life.

"It's a little bit hard to say how much the Cushing's disease runs because there's also side effects of the treatment," says Rudi. "He has had a couple of urinary tract infections, which is a common thing that can happen to dogs that are undergoing treatment for Cushing's disease, so he's pretty much by the doctor at least once a month for various reasons. We've probably spent a few thousand dollars this year, and the medication is at least a hundred a month or more."

Because Rudi had the foresight to enroll in pet insurance while Cooper was healthy, he was able to maximize his coverage—an important caveat, as no pet insurer covers pre-existing conditions.

"Since Cooper had been a very healthy dog up until very recently, I hadn't been too concerned about having pet insurance despite a lot of good advice [from] friends," he muses. "But now that Cooper and I have been through so much over the last year, I would definitely recommend that everyone that has a dog gets pet insurance... You never know when you'll run into a chronic problem like Cooper did with Cushing’s disease, and preempting that and having insurance already in place I think is a great help."