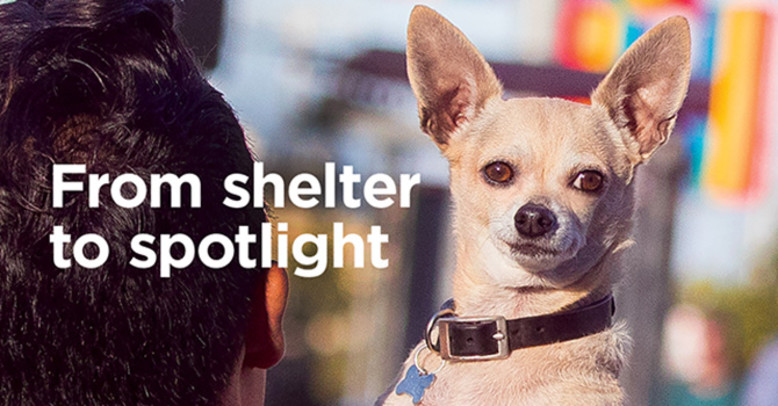 The whole world is this Chihuahua's stage

A couple weeks after their beloved Chihuahua, Pebbles, lost her battle with a rare blood cancer, Alex Rodriguez and his partner found themselves at a pet adoption center near their home in San Francisco. They weren't intending to adopt another dog, though. Instead, they were simply trying to cope with their grief—but fate had other ideas.

'He was looking for us'

"I don't think you ever feel ready [after losing a pet]," Alex muses. "And then all of a sudden it was kind of like, right place, right time."

During their visit to the adoption center, a sweet Chihuahua with a disarmingly crooked smile and googly, expressive eyes came trotting out jauntily with a huge tennis ball in his mouth—and the rest was history.

"We weren't looking," says Alex, "but he was looking for us."

This family is far from Stone Age

The little dog the shelter was calling Flapjack was generating interest from multiple families, but Alex was determined to win what he jokingly calls the "adoption war." (Of course, when it comes to pet adoption, everyone wins.)

Flapjack ultimately came home with Alex and his partner, who promptly gave him a new, Flintstones-themed name inspired by the Chihuahua to whom they had just said goodbye.

"We named him Bam Bam because of Pebbles."

Pebbles's influence didn't end with Bam Bam's new name though, explains Alex. The emotional and financial toll of her fight against cancer forever changed the way Alex protects his pets.

"[Her cancer] prompted me to always insure my pets," he says. "We had to get two or three transfusions done, and it was expensive. And it was this cancer that we didn't really account for, that we didn't know we could. And after that experience, I just like to feel safe...I don't want to ever feel in a spot where I have to start bargaining on whether or not I can [afford treatment]."

When Bam Bam found his people, he couldn't have known all the adventures that were in store for him. From making a cat best friend to having his very own seat at the Thanksgiving table ("Some people are like, 'Why do you do that?' I'm like, 'Why wouldn't I do that?'" says Alex), Bam Bam is living his best life, for sure.

But perhaps no other adventure has been as unique as finding fame on stage alongside Alex, a veteran film and theater actor and choreographer.

"I'm heavily involved in the [theater] community here. When we had adopted Bam Bam, I had been cast in 'Legally Blonde: The Musical,'" says Alex, explaining how Bam Bam landed the role of Bruiser, the Chihuahua sidekick to the show's lead character. "And because he was still so new [to me], it was also an opportunity for he and me to bond, because we had to hire a trainer so that he understood how to communicate [on stage]. We went through the training together, and it brought us closer."

Fame does come with its down sides, however. While out walking one morning, Bam Bam was approached by a dog who had just gotten out of a car and wasn’t on a leash.

"I think he just wanted his autograph," Alex quips wryly.

He's able to joke about the incident now, but that seemingly friendly greeting quickly turned ugly when the dog became aggressive.

"They went to sniff each other, and then the dog just went in and grabbed [Bam Bam] by the hind side," Alex recalls. "[His thigh] was bleeding and it was flopping open."

Cool as a cucumber

It took several weeks after being discharged from the emergency veterinary hospital before Bam Bam was fully recovered. During that time, Alex and his partner took turns staying home to care for him because he was on heavy medication and needed hot and cold compresses applied every few hours. Remarkably, though, Bam Bam was left unfazed by the attack.

"He's like the Brave Little Toaster, the Little Engine That Could," marvels Alex. "He takes a licking and keeps on ticking...He's just gone back to how he normally is."

Alex was also able to recover from the unexpected financial impact thanks to his coverage from Nationwide.

"It was a lot of ER stuff," he explains. "Luckily, we were insured for all of that, so we didn't have to worry about it...I think that was the nice thing about it was that that was something that was taken off our shoulders."

Reflecting back on the ordeal, Alex doesn't blame the dog. He, however, is more cautious now.

"There's a lot of dogs in this neighborhood, and every time I see an off-leash dog, I'm always like, 'Augh!' That's why I have him on a harness, so I can Peter Pan him quickly," he says, miming the way he uses the leash and harness to quickly hoist Bam Bam out of harm's way.

Once an actor, always an actor

Whether he's doing his best "Peter Pan" on a walk or relishing the spotlight on stage, Bam Bam certainly knows how to command an audience. And though he no longer performs professionally, he remains a thespian at heart.

When asked if the Chihuahua with leading-canine looks has retired, Alex replies: "Only from the stage, never in the living room. He’s always on stage inside the house."