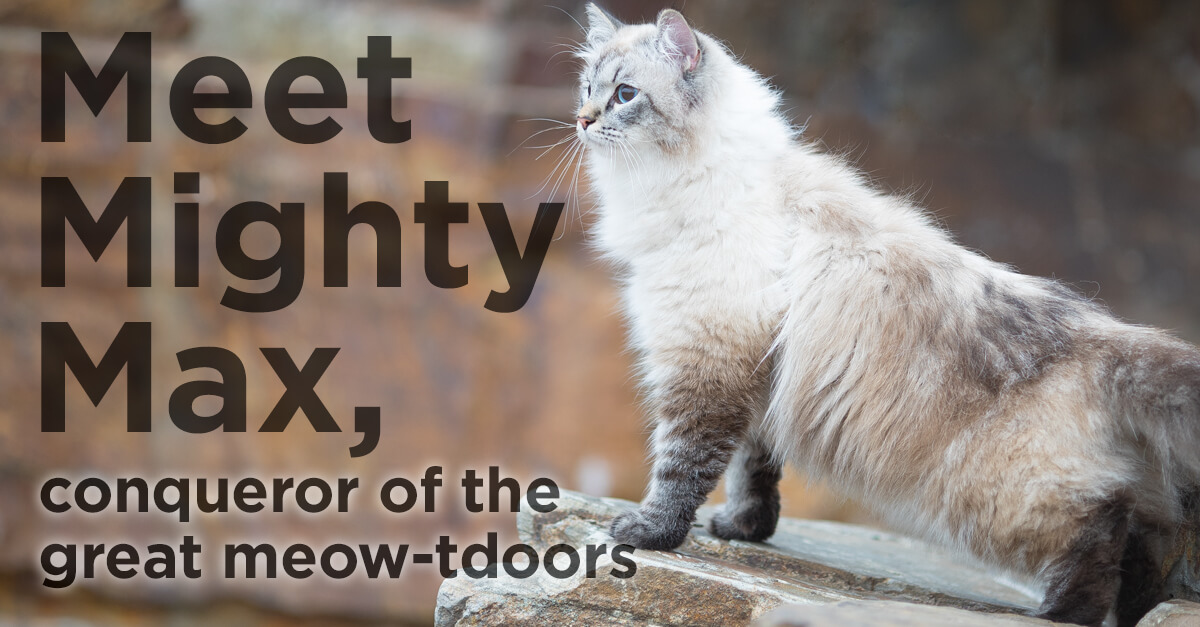 For anyone who’s ever thought of cats as fussy and aloof, Truman So would like to introduce you to his cat, Max. Or, as he’s known to his social media followers, Mighty Max the Siberian Cat.

“Most people have that first impression that cats aren’t friendly or don’t have personality,” says Truman. He speaks from experience: he, too, had the same preconceived notions before rooming with a friend who had a cat.

Now, Truman’s the one changing people’s minds with the help of his trusty sidekick, Max, a plucky Siberian Forest cat. First on the list? Truman’s girlfriend, Tiffany, a self-proclaimed dog person.

A thirst for adventure

Second in size only to the Maine coon, Siberian Forest cats are big and outdoorsy, with a proclivity for water and climbing trees, according to Truman. Max’s innately adventurous spirit proved to be a perfect fit for Truman, who has an “on-the-go lifestyle” and loves hiking and camping.

But knowing that it wasn’t safe—not to mention impractical—to simply take an unrestrained cat into the woods, Truman began training Max at just 2 months old.

“The first thing I did was get him used to being on a harness and leash,” he explains. “Just slowly building up with baby steps. First having him be comfortable going outside in the hallway, and then eventually bringing him in my little cat carrier to the park.”

Not long after, Truman took Max on his first of many camping trips and discovered that the fearless feline was a natural at hiking and exploring on-leash.

“The coolest place we’ve been with Max is probably Joshua Tree National Park,” Tiffany notes. “The rocks there are just so sticky and he can climb and not even worry about falling.”

King of the urban jungle

Max’s excursions aren’t limited to just the great outdoors, though; as a cat living in the city, he’s quite cosmopolitan—and always travels in style.

He jets around San Francisco on a moped, riding in a special “cat backpack” equipped with a bubble-like window (making him look a bit like an astronaut in a spaceship, Truman laughs).

And just as with leash training, Truman started getting Max used to the backpack early on. “A friend had sent me an article [about the backpack] a while ago and it was the first time I had seen it,“ he recounts. “When I first got it, he was a tiny little kitten meowing through the window. And now he can barely fit it, but he’s super comfortable—it’s kind of what he’s grown up with.”

This journey was no adventure

A year and a half in, Max and Truman had settled into a comfortable rhythm, even documenting their experiences on Max’s own Instagram account, @mightymaxthesiberiancat. But things took a dramatic turn one otherwise ordinary day.

Upon returning from an overnight trip, Truman found that Max had thrown up while home alone. Thinking the curious cat had gotten into something that didn’t agree with him, Truman wasn’t too concerned that anything was seriously wrong, but kept a close eye on him just in case.

Over the next several hours though, Max’s condition began declining. He was lethargic, didn’t want to eat and, alarmingly, had begun meowing in pain.

“I was like, ‘OK, you’re not getting any better. You look just not happy and just kind of miserable,’” Truman recalls. “His eyes were starting to be really closed and he was just lying on his side. So I was like, ‘We need to get you to the pet hospital.’”

At the emergency hospital, the veterinary staff quickly determined that whatever was wrong “was definitely severe,” but needed to run more tests for a clear diagnosis. Forty-five minutes later, they confirmed that Max was suffering from a urinary obstruction.

The veterinarian went over the situation with Truman, helping him understand the possible scenarios and outcomes, each more worrying than the last.

“The level of toxins from the blockage, from him not being able to go to the bathroom, was starting to potentially reach his kidneys,” explains Truman. “When I found out the news, I was crushed and devastated.”

Over the next four hours, Truman stayed at the hospital while the team tried various treatments to help Max, beginning with the most conservative, least invasive procedure, in the hope of avoiding surgery.

“With each step I was waiting there. It was really tough. I was just worried,” recounts Truman. “They tried something…first that would hopefully dissolve [the obstruction].” When that didn’t work, they inserted a catheter but the urinary stones were lodged too deeply, leaving no other option but surgery.

No hesitation, no regrets

Truman gave the veterinarians consent to do whatever was necessary to help his pal, even as the treatments were adding up.

“I think at that time he was already so stressed,” says Tiffany. “I was like, ‘Just take my wallet. Do you need me to transfer you some money? Do you have enough?’”

“At first when I paid, I split it across different credit cards [thinking] we’ll figure it out later. It was so urgent and pressing, we just needed to make a decision right there,” Truman continues. “It’s his life, basically. So yeah, the total cost came out to over $15,000 that I paid up front.”

Tiffany adds, “I don’t think we had a choice. I think we had to just do it and not even think about the price and just try to recover from the cost later on.”

Fortunately, Truman had enrolled in Nationwide pet insurance through his employer, albeit somewhat reluctantly.

“There was hesitation for sure, thinking about getting Nationwide or just pet insurance in general because it’s another expense that you have to think about,” he says. “But I realized that with things like insurance, you just never think about it until it’s too late.”

When it came time to file the claim, Truman was a bit anxious about how much he’d be reimbursed considering the number of procedures Max underwent over nearly three days in the hospital.

“Going down the list of costs, I think it was probably like six, seven pages [of] each line item, whether it’s fluids or little things that he needed along those almost three days,” he explains. “But I was really happy when the money did come back.”

Ultimately, Truman’s reimbursement covered more than half the cost of Max’s surgery and treatments. And his annual premium?

Today, Max is happy, healthy and back to going on outdoor adventures. He stays busy cultivating followers on Instagram, too—with a little help from his humans, of course.

“I think he has something like 1,300 followers. It’s pretty fun,” says Truman. “It’s just nice—there’s a big cat community out there.”