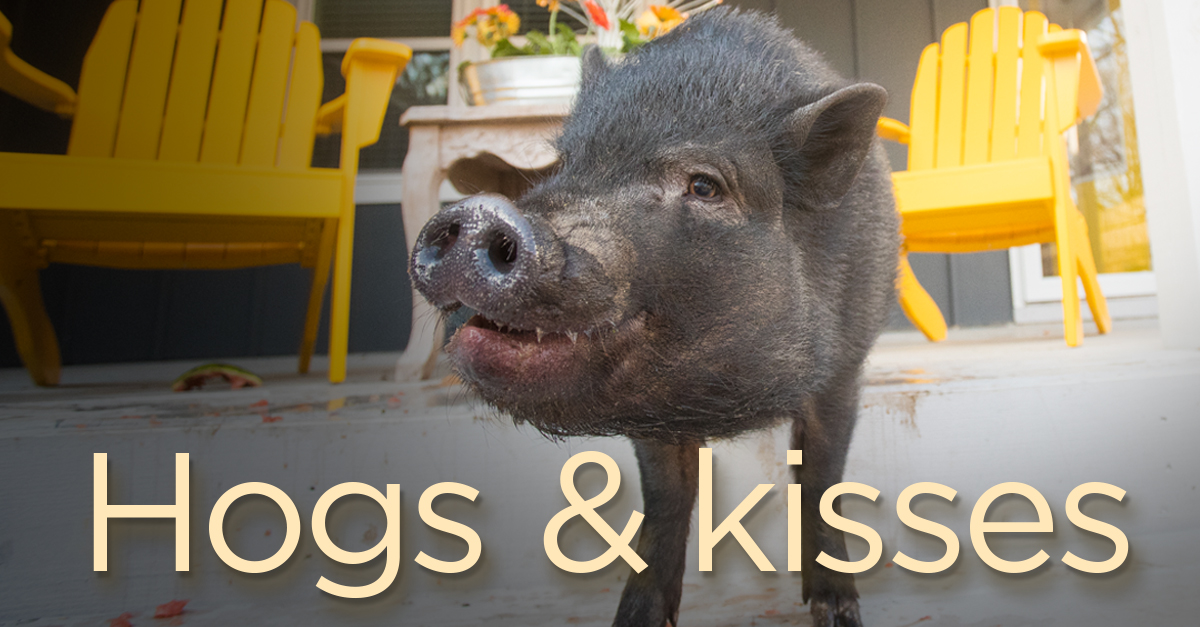 Swooning for a swine? This pig parent has important advice.

Longtime Nationwide pet insurance member Justin Miller is the proud pet parent of two dogs, nine chickens, one rooster and two very spoiled pigs. He talks with us about his menagerie ("My backyard sounds a bit like Jurassic Park, haha") and shares some words of wisdom for anyone thinking about getting a pig as a pet.

To be honest, pigs were never too high on my list of "pets to live with" until about three years ago, when I came across an article about pigs as pets. The more I read, the more I realized they're not only fascinating animals, but animals that are mistreated on so many levels. I've always been a really big animal rescue advocate and the abuse they endure led me to my first rescue, Theodore Pig Newton.

I drove over to the auction on the morning he was being brought out, and told everyone there not to bother bidding on him because I would outbid them. I'm 6'4" and covered in tattoos. Everyone followed my request.

The auctioneer started at $25 and, just as planned, no one but me bid. So two minutes later, I had myself a pig. Uh-oh. What did I just do? In hindsight, it was one of the best decisions I've made.

Theodore—formerly Wilbur—lived as the solo piggy until we found our next rescue. Talulah was picked up by animal control in Asheville, N.C. and had spent five months in a cement cell. The shelter put out a desperate call for adoption as they were inundated with pigs, most of which were dumped for "not being micro pigs." (More on that later.)

Talulah was getting prepped to be euthanized when I made the call to a friend who lives there. He connected me with a friend of his who happened to be making a cross-state trip that day. I messaged him with a very unusual request: "Hey, Michael. You don't know me but is there any way you can pick up a pig from the local shelter for me and meet me tonight? She's a pet, NOT food."

After coordinating logistics, we were able to get Talulah out of the shelter and on her way to her forever home here in Raleigh, four and a half hours away. We met Michael and Talulah, then transported her in the back of my girlfriend's Porsche—because every shelter piggy should arrive in style!

Pigs have very unique oinks, grunts and calls, and vary them non-stop depending on the ask, request or situation. Lots of folks don’t understand that pigs are really smart and have such unique personalities. The most common response after people meet Theodore and Talulah is, "Wow, they're like really smart dogs," or "Ugh, now I can’t eat bacon anymore."

Most people don't know that "micro" or "teacup" pigs are a myth—its a marketing hoax. This creates a vicious circle: Buy teacup piglet. Raise for six months. Realize pig gets larger than 20 lbs. Dump at shelter.

Pigs make great pets for a variety of reasons. They're actually pretty low-maintenance compared to the dogs and are—surprisingly—much cleaner. They relieve themselves in one area only in their pen and don't like being dirty, as many folks may think. They're really sweet animals. Very affectionate. They're eager to learn; you can see the wheels turning when you present opportunities to them.

However, pigs are NOT for everyone. If you can't let a pig be a pig, I would advise against them. A "pig being a pig" means giving them room to root, giving them a place to make a mess and a space of their own. They can be mischievous because they're so intelligent and good at problem-solving. Theodore, for example, knows he’s not supposed to go into the chicken coop or the shed, and will wait until I have my back turned and then run like the wind to get in there. He also taught himself how to manipulate his puzzle toys to minimize the effort needed to extract the treats.

The worst thing that can happen and, frankly, happens far too often, is an impulse pig purchase/adoption and then the animal winds up being rehomed because it's more than they wanted or anticipated.

It's critical to ensure their enclosure stays clean, they always have access to fresh water and proper food and that their weight is properly maintained. The most common health problems are obesity—and the subsequent issues that arise from it, including going blind and deaf—and cancer, especially in unaltered pigs. Arthritis is also common, along with dry skin. Pigs are especially sensitive to sunburn. Proper nutrition and supplements are key to a healthy, long life. Pigs can live into their late teens and twenties!

If you decide this is the right pet for you, adopt! Shelters and rescues are bursting at the seams with piglets and adults that need homes. A local pig rescue, Blind Spot Animal Sanctuary, currently has over 40 pigs looking for forever homes, many of which were dumped for being pigs, not micro pigs.