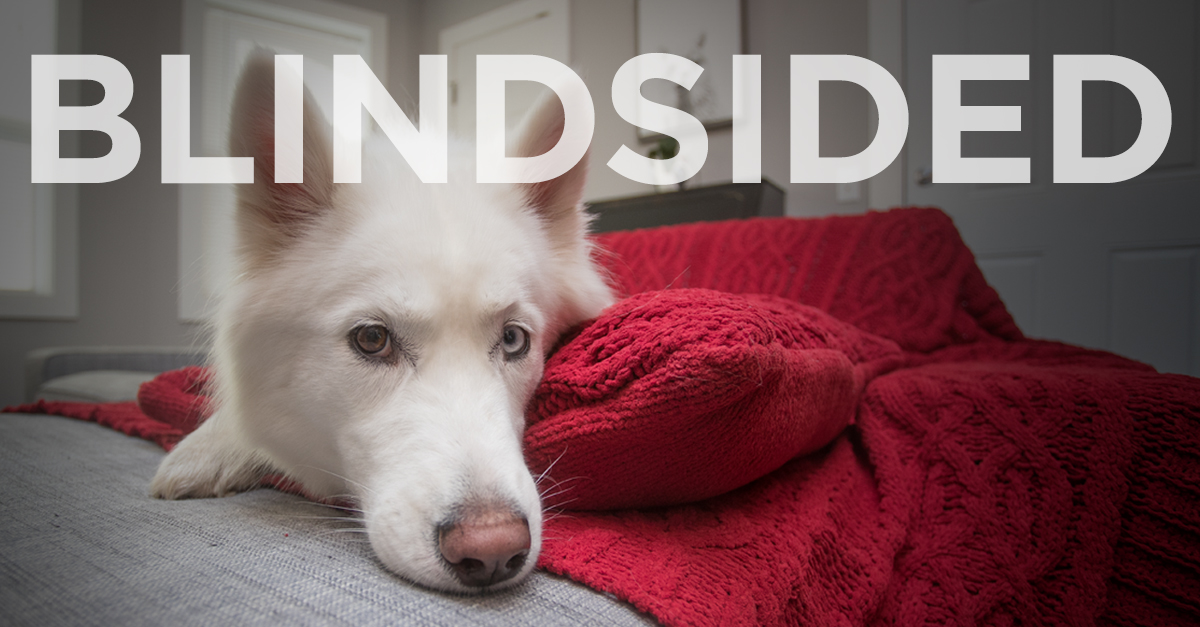 Katie and Bart Ducharme's first pet as a couple, Charlie, was the first of several spur-of-the-moment, four-legged additions to their family.

It was eight years ago, and the Ducharmes had just moved into a pet-friendly apartment in Connecticut. Katie was browsing online when she spotted six puppies with a heart-wrenching story available for adoption.

"I wanted a puppy," explains Katie. "I found him online in New York and I rushed to pick him up."

"To a shelter in downtown Manhattan in rush hour," Bart interjects.

"We had nothing planned," Katie continues. "They were closing, but we were like, 'Please save one of them!' And when we got there [Charlie] was the last one left."

Last, but not least

Charlie and his five siblings had endured a harrowing start to life that could have had ended very differently—without a lot of luck and a lot of caring people.

The six young puppies were found in a bag on the side of a New Jersey highway before being brought to the shelter in New York. Shelter workers believed the pups were the result of backyard breeding that didn't come out the way they wanted to.

But for Bart and Katie, the "schnauzer...spaniel...Lab...mix?" was simply perfect.

"We fell in love with him," says Katie. "And we took him home that day."

Despite his less-than-ideal beginnings, Charlie was a model puppy from the moment he was adopted.

"Charlie was really easy" Katie recalls. "He was like, 6 weeks old when we got him, and he's always been a good, calm dog [and] listened to what we say from the get-go."

Things were smooth sailing with Charlie—the only real bump in the road being an emergency vet visit when he was vomiting late one night.

"After the first emergency vet visit, I think we sat down and realized that this could be an expensive venture," Bart says.

Charlie was fine, but the experience led Bart and Katie to sign up for pet insurance.

Having lived contentedly as a family of three for several years, Bart and Katie figured adding another dog to their brood would be just as easy as it was the first time. And the timing seemed right: they had both finished school and started working, which meant Charlie was now alone during the day.

Then, fatefully, Katie met a man at the pet store with a litter of husky puppies.

Fast forward a week or so, and Charlie had a new husky sister. This time, however, the impromptu addition didn't go quite as smoothly as it had the first time.

"I thought Charlie needed a friend. So I brought Kemba home one night...and they hated each other," Katie admits, laughing. They can joke about the rocky beginnings now, as Charlie and Kemba have grown as close as brother and sister.

"Now they cry if they’re separated," she says.

While Charlie was agreeable and well-behaved from the start, Kemba proved to be a bit more...challenging.

"Kemba does a number on couches," says Bart. "If she doesn't get her morning walk, I'll most likely come home to a torn-up couch and the stuffing everywhere."

Adds Katie: "She sneaks over to the neighbor's and digs in the same spot every single time. We've had to go and patch it up. Our neighbor's very nice and understanding, though."

The mischievous husky has also been known to eat sewing needles, Advil PM, entire sticks of butter (four at once!) and raw beef patties that were waiting to be grilled.

But all of those incidents paled in comparison to what Bart and Katie discovered about their puppy soon after bringing her home.

When Kemba was less than a year old, she began pawing at her eyes, which looked red and irritated.

"She'd never done that before," Katie recalls. "I'm overly concerned, because they're like my children... I knew it was something to do with her eyes, so I booked a specialist. I actually researched one of the top specialists in the area for dogs and eye problems. We took her and found out she had juvenile cataracts."

Remember the man at the pet store with the litter of husky puppies? As it turns out, Kemba's condition is likely the result of irresponsible breeding.

"Kemba was actually from a backyard breeder, which is why she has the juvenile cataracts," Katie explains. "So [learning about Kemba's condition] is how I found out if you breed huskies that are related or haven't been checked for certain things, this is what happens."

After learning that her beloved puppy would progressively lose her sight, Katie drove home in tears.

"It's just heartbreaking that this beautiful dog at such a young age could have something so horrible happen to her," she says.

But vision loss or not, Kemba keeps living life to the fullest in that perpetually joyful way that dogs have.

"It hasn't held her back in the least. She chases animals in the backyard and she doesn't care at all," says Bart.

"She's happy-go-lucky,” agrees Katie. "She was so young when she got it that the vet said she doesn't really notice that anything's changed. So for all she knows, this is who she's always been. This is how she normally sees. We're happy about that."

Fortunately, protecting all of their pets with Nationwide was "a no-brainer" for Katie and Bart. "When Kemba came, it was, 'Of course we're going to add her to the policy,'" says Katie. "Same with my cats, Louis and Coach."

Suffice it to say, Bart and Katie are grateful they have Nationwide—especially as they look forward to sight-restoring surgery for Kemba in a few years, when her eyes finish maturing.

"I had never heard of pet insurance before we got Charlie," says Bart. "So at first, I questioned it: Why are we paying for this? But when you see how much money comes back in the reimbursement checks, you realize that it just makes sense."

"I often joke that my [pets] have better health insurance than I do," Katie adds. "I go to the vet and I don't have to worry so much about what my costs would be, because I'm going to be reimbursed."

When asked what advice he'd give someone considering pet insurance, Bart doesn't skip a beat.

"I would ask them why they haven't gotten it yet."