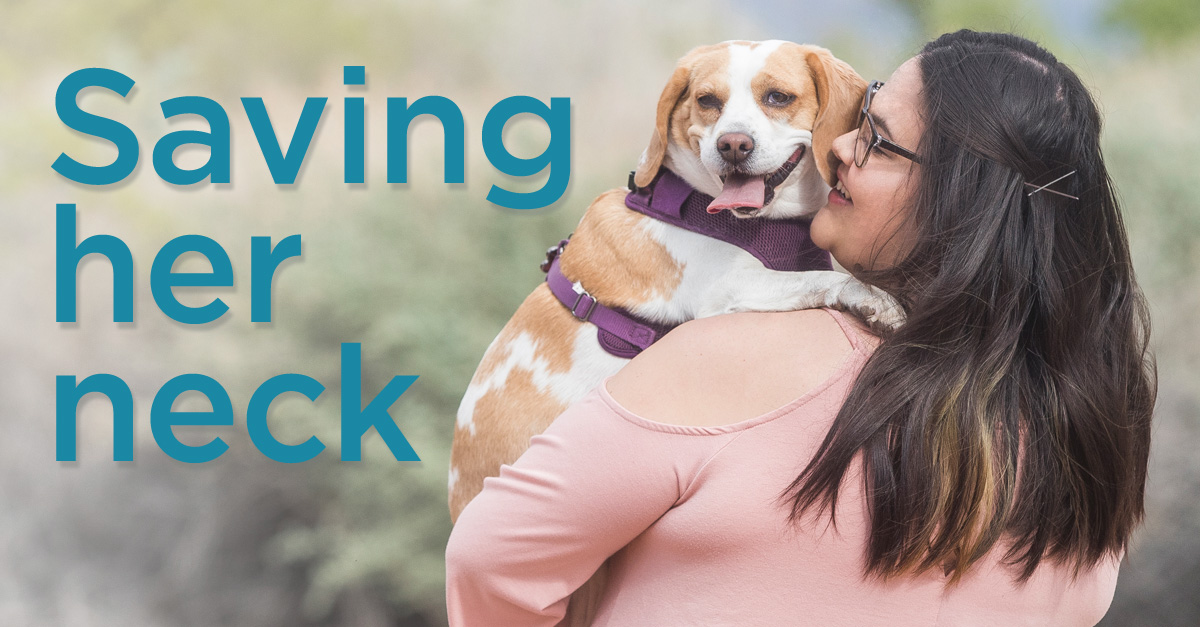 Most high school juniors are occupied with term papers, driver's licenses and navigating teenage life—not with the challenge of taking full financial and physical responsibility for a pet. But Melissa Barnett wasn't your typical high school junior.

"I was going through a really, really tough time," she explains. "I just needed something to keep me grounded."

That "something" turned out to be a puppy named Annabelle.

Though Melissa knew she wanted a puppy, she didn't know what kind. She had been searching online but hadn't found The One. Out of the blue, her brother suggested a beagle.

"I hadn't seen one listing for a beagle. And then that day I actually saw a listing for beagle," Melissa recalls. "I was like, 'This is it. This is a sign.'"

The litter was advertised as including two girls, but she was only introduced to one who, Melissa knew right away, wouldn't be a good fit with her family's two older dogs ("She was too fiery, too spunky."). But when Melissa inquired about the other female pup, the owners explained that they had decided to keep her. Undeterred, the teen pressed on until they finally agreed to show the last littermate.

"They brought her out and she was sleeping. She was really calm, and I was like, 'This is the one. This is the dog. This is exactly what we’ve been waiting for,'" says Melissa.

Fast forward a few years: Now a young adult, Melissa was out of high school with a job and a best beagle friend. Life was good—until the rug was pulled out from under her.

"I can't even put into words [what Annabelle means to me]. She's everything. Ev-er-y-thing. So when she got sick, oh, it was like the end of the world," Melissa says, her eyes welling with tears as she recalls the ordeal.

After going for their usual early morning run, she noticed Annabelle seemed lethargic. Thinking the beagle was just tired from the exercise, Melissa left her to rest while she went to work. But when she got home, she knew immediately that something wasn't right.

"When I came home, Anna was laying in her little pet bed, and she didn't get up. It was like she was asleep, but she was awake, paralyzed basically," she says. "She'll always get up and say hi to me, run to me, give me love and kisses. And she couldn't even lift her head up to look at me.

"That was just like the world crashing down. I was trying to keep calm and kneeled down to see if she would at least crawl to me, and she couldn't even crawl to me."

Though there's never a good time for pets to get sick or hurt, the timing on this situation was particularly bad: Melissa was scheduled to be on a flight to Alaska in eight hours for an important trip.

The emergency veterinarian diagnosed a pulled a neck muscle, surmising that it had happened on her morning run. Not too concerned that it might be anything more serious, he gave Annabelle a sedative and sent her home with pain medication.

Melissa was conflicted: On the one hand, she trusted the vet's opinion, but on the other hand, she had a gut feeling that there was more to Anna's condition. This left her torn over whether to go on her long-planned trip.

Comforted only by the fact that she'd be leaving Annabelle with family, Melissa decided at the last minute to go—and immediately regretted it.

"I went on the plane and I was freaking out the entire time," she admits.

On the third day of her trip, Melissa got some distressing news from her dad.

Frantic, Melissa was ready to hop back on a plane but her father insisted she stay, as there wasn't anything more she'd be able to do for Annabelle at home. She agreed, but agonized for two long days before she could finally get home.

From bad to worse

The morning after arriving home, Melissa woke to an alarming sight.

"She was in our hallway and she was sprawled out," she recalls. "She looked like she was dead."

It quickly became clear that something was very, very wrong.

"She was screaming at the top of her lungs when I would just pick up her leg off the ground," she says.

This time Annabelle saw a different veterinarian, who agreed that her situation was more critical than just the muscle injury that was initially diagnosed. Further testing revealed that the beagle was actually suffering from intervertebral disc disease—and had two herniated discs in her neck that needed surgery. Problem was, it was a holiday and the nearest veterinary specialty center was closed.

Because of the long weekend, it would be four days before Annabelle could get in for surgery. Then, as if the wait hadn't been harrowing enough, there was a complication during the procedure.

"When you put any dog through surgery, you always worry. Like, anything could happen—and something did happen," says Melissa. "They nicked an artery or something when she was in surgery, and they actually had to sew her up. And then they had to go back because she wouldn't stop bleeding."

It's darkest before the dawn

Annabelle pulled through, but still had an uphill battle ahead. Facing months of recovery during which Anna would need constant care, Melissa rearranged her life around the beagle's needs; she dog-proofed the house (Anna was "basically a floor dog" after surgery), and got used to picking her up to go outside.

Good timing (for once)

Despite all the things that went wrong in Annabelle's situation, the one thing that went exactly right was her Nationwide pet insurance coverage. But when Melissa's dad first introduced the idea, she had balked.

"I was like, 'Pet insurance? Who has pet insurance?'" she remembers saying. "So I'm thinking my dad's crazy. And he's like, 'No, let's look into it.'"

And it's a good thing they did, because Annabelle's emergency happened just one month later—to the tune of $6,000.

"We didn't know what would be covered," Melissa says. "We ended up getting back over $5,000. We never thought that we would get [that much]. We were thinking maybe half—we'll cut our losses at half. But when we got over five [thousand], that was insane."

Wise beyond her years

After making it through Annabelle's crisis, Melissa has a profoundly different outlook on pet insurance.

"It changes how I think about my friends' and family's pets. Like, if you love them so much, why don't you protect them?" she says. "They talk about their pets like they're their own kids. So why wouldn't you protect your own kid?"

And although Melissa knows that people aren't always willing to take financial advice from a 21-year-old, she recommends pet insurance to anyone who'll listen.

"I just feel like if you're a pet owner and you care about your dog, you should get Nationwide pet insurance to cover yourself, to cover your pet. It'll save you a lot of money and worry in the long run."