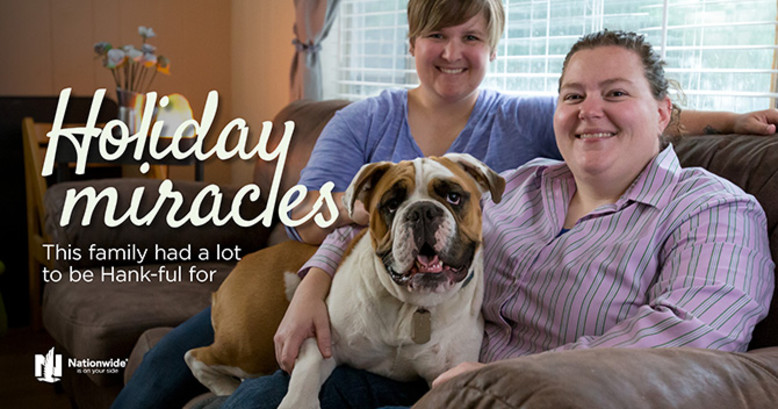 A holiday miracle for hank

After saying goodbye to their beloved 13-year-old Bernese mountain dog, Nationwide® members Jenny and Kim searched for the right pup to fill the dog-shaped void in their family.

With years of experience in bulldog rescue, Jenny thought a playful, rambunctious bulldog puppy would fit in perfectly with the couple and their kids, aged 2 and 6. They soon found Hank, who joined their family in November—giving them all something to be thankful for that year.

Just in time for trouble

As they were settling in with their new puppy, Jenny brought up the idea of pet insurance.

"I knew from doing rescue that bulldogs have a lot of issues and their vet bills can be very expensive," she explains. Kim didn't quite see things the same way.

"I previously had insurance for a different dog, and it really didn't cover anything," she says. "I wasn't very happy with it and felt like I was spending money monthly on basically nothing."

But when Kim's coworker told the couple about her positive experience with Nationwide, they looked into it and, Kim says, "We were very pleased with what we found."

Miraculously, they got the pet insurance just in time.

'Twas the week before Christmas

Things were going great with the new puppy until just before Christmas.

"We noticed that Hank was acting weird," Jenny recalls. "He wasn't chasing the cat like he normally does, and at first I was like, ‘Oh, maybe they're getting along.'"

Kim chimes in: "But then I watched him closely and noticed that a lot of his behavior had changed. He wasn't drinking. He was sleeping a lot, which for a bulldog isn't that unusual, but it was for him since he was still very young."

On the third day of Hank's illness, Kim crawled in the kennel with him.

"I was listening to his belly sounds. I was trying to figure out what was wrong with him," she says, "And then we made the decision, right then and there, to take him to the emergency room."

Kim and Jenny worried that Hank had eaten something that was causing a bowel obstruction. But the bloodwork showed something much more serious.

Out of left field

It turned out that Hank was suffering from a significant bacterial infection and was in kidney failure.

Hank needed to be admitted to the hospital immediately. The doctors soon diagnosed him with leptospirosis. "It's a really weird and rare bacterial infection that dogs get from wild animals," Jenny explains.

Later, when Hank was in ICU, the doctors told Kim and Jenny that Hank only had a 50% chance of survival.

"Hank's belly was huge. His liver had been failing. All the white on Hank's body had turned yellow. His eyes were yellow. He needed a full catheter to monitor his urine. He had multiple IV's. He had a central line going through him. He was very, very sick," Kim recalls.

When the couple had to go home for the night, Jenny was distraught about leaving Hank alone at the hospital. She was wearing two shirts, so she took one off and gave it to him in the hope that he would be comforted by her familiar scent.

"He just held onto it, and he just looked terrified," she says, tears in her eyes. "And I think he really thought that we were going to leave him there."

They worried about Hank. They were concerned about their children having to suffer again the loss of a beloved dog. They also wondered: Was Hank even going to make it until Christmas or would their kids' little hearts be broken on the most magical day of the year? And how would they manage the cost?

Time for a holiday miracle

On Hank's second night in the hospital, Kim and Jenny spoke with the critical care veterinarian, who informed them that Hank's situation was dire.

"She told us if he doesn't begin to produce urine, he might need to have dialysis," says Jenny.

Overwhelmed with the extent of what was happening, Kim and Jenny had a difficult conversation about Hank's care, ultimately deciding that if he didn't start getting better, they would have to put him down because the cost to treat him would be unaffordable.

But against all odds, Hank turned a corner and began producing urine not long after Kim and Jenny's gut-wrenching conversation.

The kids visited Hank in the hospital on Christmas day, bringing cookies for the doctors and nurses who took such good care of him. This Christmas was an especially happy one for the whole family.

The best Christmas gift ever

"Thankfully, we had Nationwide pet insurance," Jenny says. "If we didn't, we wouldn't have been able to continue care for Hank, because there's no way we could have afforded that expense without it."

Kim says, "To know that Nationwide was there for us and carried us through that terrible period was pretty amazing. We couldn't be happier."

And how is Hank doing today?

"He's fantastic, roly-poly. He looks like a chicken nugget running around, you would never know that he had been so sick" Jenny says. "He's a huge part of our life. He thinks he protects us from the mailman and from the squirrels. He plays with the kids, and he thinks he babysits them. He's the big brother. He makes us a complete family, and I don't think we'd be the same without him."