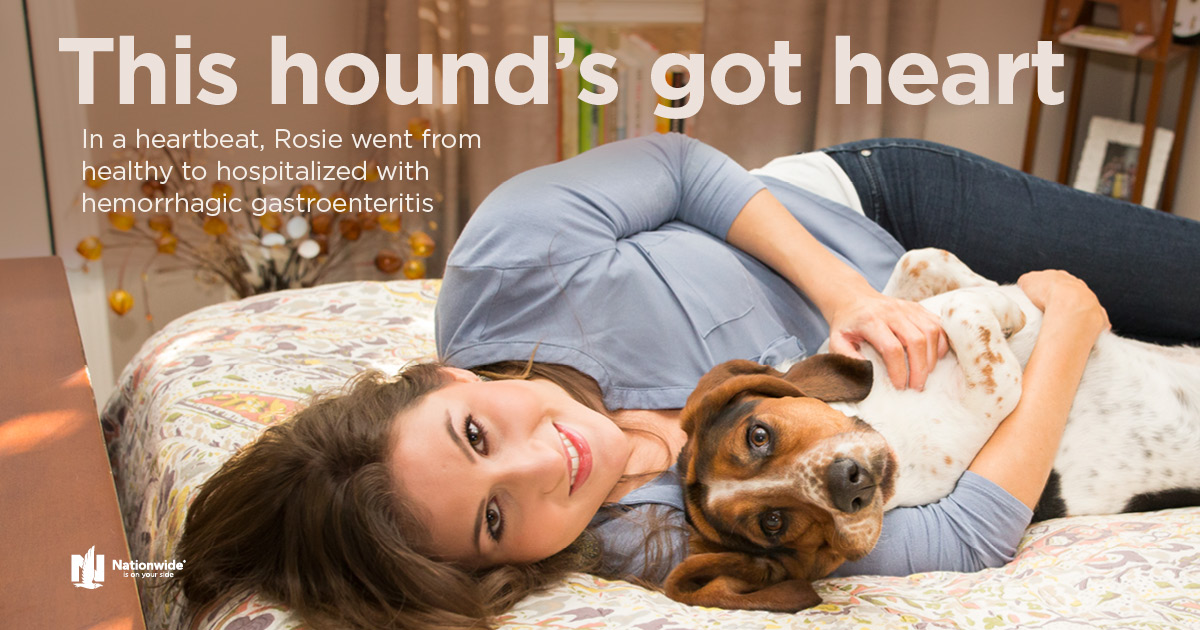 When Ashley Mengwasser of Atlanta saw the heart-shaped spot on Rosie’s back, she knew it was kismet.

"Once I saw the heart and I knew the hole in my life I was trying to fill by having a pet, I knew that she would be my pet forever," says Ashley.

Though the self-described “single mom” of Rosie, a basset hound, is the model of responsible pet parenthood today, she admits initially being overwhelmed by the reality of caring for her first pet as an adult.

"The first few days after I brought Rosie home as a puppy were absolutely terrifying. It was terrible. I felt ill-equipped for having a dog," Ashley confesses.

Navigating those bumpy first days together helped the duo work out their growing pains.

"It was really scary being a single parent at first, but you know what?” says Ashley. "We've come a long way and I'm really proud of the dog she’s become."

And Rosie's become one brilliant basset, thanks to her mom’s diligent care.

"She's very healthy and happy and the vet constantly says she's the poster child for what a healthy basset should be," Ashley beams.

Between thrice-weekly teeth brushings and ear cleanings, Rosie goes for daily walks—sometimes up to six miles when she stays with her grandmother (also known as Ashley's mom).

"Rosie is a fitness guru," laughs Ashley. "She loves to work out."

By all accounts, Ashley is doing everything right when it comes to Rosie—which is why what happened next serves as a cautionary tale to even the most conscientious pet parents.

One morning last summer, Ashley noticed that Rosie was a bit lethargic and had vomited. But because there didn’t seem to be any major red flags, Ashley figured "maybe she was just tired or had a little stomach bug." In fact, Rosie seemed well enough that Ashley felt comfortable going to a concert she had planned to attend with friends.

But en route to the show, she received a text message from her roommate, saying that Rosie didn't "seem right."

She went to the concert but stayed in close contact with her roommate, getting updated on Rosie’s condition. Three hours in, things took a dramatic turn.

"I got a call from my roommate that Rosie was very sick, that she was vomiting and having bloody diarrhea," Ashley recounts. She immediately left the concert via Uber and asked her roommate to meet her at the emergency vet hospital, terrified about the news she would receive once there.

"Every single family pet we owned died from cancer, so when I found out this happened, my mind went to the worst possible place," she explains. "That's what I'd been conditioned to. That's what I've experienced with pets."

Rosie was diagnosed with hemorrhagic gastroenteritis, a serious condition that comes on suddenly, without warning. It affects otherwise healthy dogs, and veterinarians don’t know what causes it. The main, and most alarming, sign is bloody diarrhea, but other symptoms can include vomiting, painful abdomen and lethargy.

Fortunately, Rosie was able to go home the next day thanks to the timely care she received, but the bill for her hospital stay took Ashley by surprise.

"It was around a $1,600 experience," she says. "I panicked a little bit, honestly, because most of our vet bills are around, you know, $300 max…. But then I knew I had Nationwide, so I could submit my claim … it was such a relief to get that check in the mail."

The best asset for her basset

When she first signed up Rosie for a pet insurance policy, Ashley says her friends thought she "was completely ridiculous." But as it turns out, having pet insurance has helped Ashley give Rosie the best care possible whenever she's needed it.

"As a young adult, you have to make a lot of smart decisions with a limited budget. With Nationwide insurance for my pet, I don't ever have to second guess 'Should I take her to the vet or not?'" she explains. "I don't ever make a monetary decision when it comes to my pet's health. I just go to the vet…. Normally, I could see myself just kind of waiting until it's absolutely dire, and you don't want to do that for your pet because you don't know what kind of situation could be going on internally."

Rosie's Nationwide pet insurance coverage is even more important now, as hemorrhagic gastroenteritis tends to be a recurring problem.

"It comes on completely unexpectedly, and they say that once a pet has had it once, they're kind of susceptible to having a recurrence," says Ashley. "So I expect that at some point later in her life, this might happen again. But now I know what to do the next time."

It takes a village

Though it’s clear that Ashley is a dedicated pet parent, she credits those around her for helping make sure Rosie is well taken care of.

"I think as a single mom with a pet, I've learned how important it is to have a community and have a family to help support your pet. I have a roommate. I have friends. I have my mom and dad, my family, who's very involved in Rosie's life and her care. I would consider Nationwide another extension of that. Having Nationwide as part of that support system makes this more like a complete family."