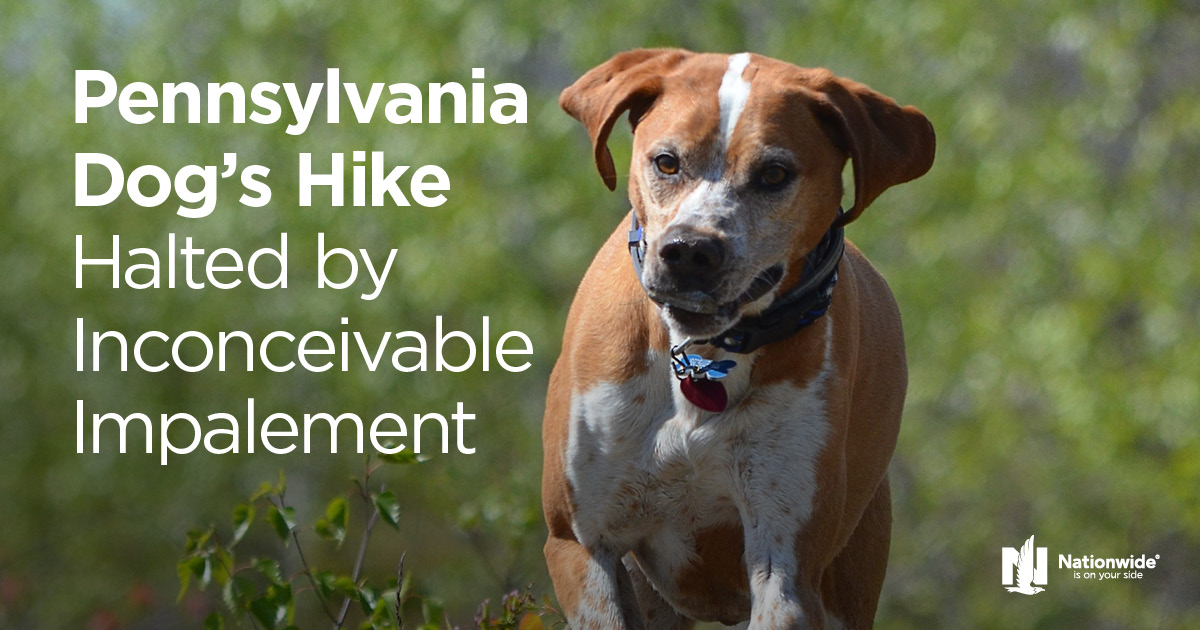 Eight years ago Jen Hawker of Scranton, Pa visited a local litter of puppies in need of a home and felt an instant connection with a tiny male mutt. Jen took the hound mix home and named him Rooster. Since that fateful day, the duo has created an inseparable companionship that has helped serve as guidance through difficult times. But that relationship nearly came to an abrupt end when Rooster was brutally impaled by a large branch during a routine hike. Rooster’s horrifying injury and miraculous recovery have earned him the title of September's "Most Unusual Claim of the Month" by Nationwide, the nation's first and largest provider of pet health insurance.

Jen and Rooster's bond was groomed out of misfortune. After a terrible accident at work, Jen was forced to take time off work and eventually retire from her profession as a firefighter. During those troubling times, Rooster became Jen's main therapy tool, helping her deal with stress and the everyday struggles of life moving forward.

"Rooster and I have a special relationship," said Jen. "I've had other dogs, but none have been as comforting as he is. There are some injuries that never heal, but Rooster has helped tremendously, and I just love him to death. He's my personal therapy dog."

On the day of the foliage fiasco, Jen had taken her small pack of dogs on a day hike in lieu of her daily gym routine. The group included Rooster, Jen's other dog Goose, and a foster dog named Lulu. The group was enjoying the mid-week seclusion on the access road trail. The lack of foot traffic allowed the dogs some off-leash freedom and gave Jen a chance to listen to her favorite podcast. The quartet was nearly done with their journey when the dogs noticed some vermin and sprinted down a small hill. Suddenly, Jen heard a loud cry.

"I thought I heard a yelp over my headphones," said Jen. "When I called for the dogs to come back, Lulu and Goose ran out of the bushes and back up the hill, but Rooster was just standing there. When I approached him, I noticed an elongated bulge on his side and knew something was wrong."

Thinking that Rooster may have fallen and severely broken his ribs, Jen tried to carry the ailing pup back to the car, but each attempt was met with severe cries of pain from Rooster. It became apparent that Rooster was suffering from a serious injury and needed immediate medical attention. With Rooster unable to walk and Jen unable to carry him the remaining distance, the group was out of options.

"We were stuck and I had no other choice than to dial 911," said Jen. "I wasn't sure if they would use their resources for a dog, but the operator assured me she would call back when help was on the way."

Within minutes an officer arrived to the trail in a large SUV. Jen flagged down the vehicle and out of the driver's seat appeared the city of Jessup's chief of police, Joseph Walsh, to provide assistance. Wasting no time, Chief Walsh moved the SUV within 30 yards of the injured canine and attempted to help carry the dog using his vest as a makeshift stretcher, but Rooster was in too much pain. With just a short distance to safety and options limited, Jen encouraged Rooster with a confident tone, and the brave dog walked the short distance to the car.

Once in the car, Jen rode in the back with Rooster while Lulu and Goose rode in the front seat with the police chief. Jen arranged for a friend to pick up the other dogs in the parking lot so that she could rush Rooster to the emergency veterinary hospital. As she passed off the other two members of the pack, Chief Walsh could sense the immense distress Jen was in and offered to escort them to the hospital. Chief Walsh drove the ailing hound to Veterinary Referral & Emergency Center of South Abington for treatment. Upon arrival, emergency veterinary staff quickly examined the injury and prepared to take Rooster for X-rays and testing. One of the technicians pointed out an open wound on Rooster's side and speculated that the large mass might be an impaled stick.

"I was in total shock when they told me that Rooster could have been impaled," said Jen. "I was worried that he could be hurt much worse than I thought. When they wheeled him back, he howled in pain one last time and it tore me up, but Chief Walsh was still there by my side and provided comfort. He even went and brought back lunch while we waited for Rooster's diagnosis."

After an agonizing wait, the staff returned with shocking news. Rooster had indeed been impaled by a large branch that spanned over a foot long and had narrowly missed his lungs by less than an inch. The branch required a unique surgery that forced the staff to create an opening on the opposite side of the entrance wound for removal.

After the surgery, Rooster needed a couple of weeks for the wounds to heal and the soreness to wear off. Jen is relieved that Rooster survived the ordeal and is grateful for all parties involved that helped save her companion's life.

"I'm so happy that Rooster came out of this ordeal without any lasting damage," said Jen. "I'm so grateful for the amazing care the veterinary staff provided for Rooster, and I'll never forget Chief Walsh's kindness. Having Rooster insured through Nationwide also helped out immensely. I know I'll never have to think twice about getting him veterinary care because of the excellent coverage we've received."