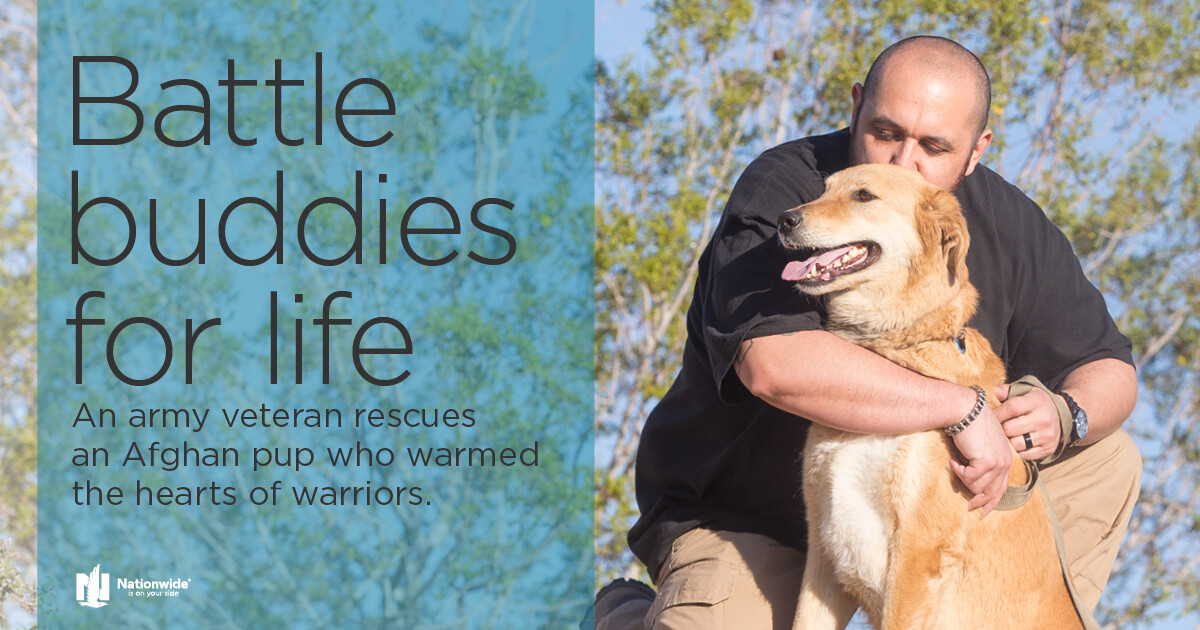 Gabriel Meza grew up in a tough area of Norwalk, California. "I don't want to say I was fearless, but I didn't fear anything," he admits. The skills he acquired navigating the streets of his neighborhood com-bined with the knowledge he learned by studying hard in high school gave him a way out—and prepared him for the dangerous years ahead.

Taking his lead from his father, who was an Army "lifer" and worked on a base that housed military air-craft, Gabriel joined the Army when he was seventeen years old and served as a helicopter Crew Chief and mechanic for eight years. Had it not been for a back injury, he would have reenlisted. So he did the next best thing: he became a helicopter pilot for an organization that sent him oversees to Afghanistan for months at a time.

One day flying in his helicopter in Afghanistan, Gabriel picked up passengers and cargo at a landing zone and spotted some orphaned puppies running around. He grabbed the closest one, a little "furball," tucked her under his arm and took her into the helicopter. Looking into her eyes, Gabriel immediately was smit-ten.

Gabriel looked at the puppy's massive paws and wondered what breed she was. He knew the only AKC-recognized breed in Afghanistan is the Afghan hound, and she definitely wasn't one of them. Later, Ga-briel learned that his pup belonged to what is commonly known as the Sage Kuchi breed, named after the Kuchi—a nomadic tribe that travels on camels across Afghanistan in caravans.

One thing Gabriel knew for sure: in Afghanistan, dogs of any breed don't have a very pleasant or long life, even when they were as adorable as his newfound puppy.

"That's why I had every intention of keeping this little puppy, protecting her and giving her one of the best lifestyles that she could get," Gabriel says.

When Gabriel's puppy first ran out of the aircraft at his home base, all the men gathered around her, ooh-ing and aahing. And everyone wanted a hand in naming her.

"When I first got her, I called her Baby Girl," Gabriel recalls. "Then we covered a dry-erase board with names, and one of the guys yelled out, 'How about Lizzy?' Lizzy is long for LZ, which is the abbreviation for landing zone. So I thought that was the perfect name!"

One of Gabriel's friends pulled him aside and warned, 'You know your heart's going to get broken, right?"

Like his friend, Gabriel worried that eventually the higher-ups would find out about Lizzy, and they would put her down. He reasoned that even if he only had six months to spend with her, he would be sure it was the best time of her life.

Most important, Gabriel knew he had to keep Lizzy hidden. That was relatively easy because he lived alone in an eight-man tent at the far end of the base. And when he was away working, his pals took charge.

"One of the guys built a doghouse for her inside the hangar. While I was flying, she had many uncles tak-ing care of her. Once I was done flying for the day, I'd land and call her name, and she'd come running out."

In the beginning, he would take her home every night, and because she was a puppy and very energetic, he'd play with her until she fell asleep. Then he would tiptoe away to find her something to eat. "At first, we didn't have food for her, so every day I would go to the chow hall and I would get a to-go plate," he says.

After a few weeks, Lizzy was in demand. Many of Gabriel's friends had dogs at home they were missing, and so they would ask him if Lizzy could sleep with them. Of course, Gabriel agreed.

"Lizzy loved everybody like you wouldn't believe," Gabriel smiles, remembering. "Me, I was like a dad with a newborn. I had to attend to her every need, and the guys and gals were almost like a babysitter saying, 'Hey, I'll watch the baby for the night, you know, give you a break.' So Lizzy rotated throughout the whole company."

On the base with the basics

Like any devoted father, Gabriel went to great lengths to provide the best life for his "baby girl" on the base. He ordered bags of dog food online that were delivered to his APO address, and he figured out how to get Lizzy all the vaccinations she needed.

He explains, "I contacted a rescue organization—Puppy Rescue Mission. Their job is to help soldiers with their pets in places like Afghanistan or Iraq, it didn't matter where in the country. They would do anything and everything possible to get vaccination materials to the location where you're at."

There were quite a few times when there wasn't enough staff on the ground to watch Lizzy, so Gabriel took her with him.

"She had her own little spot in the back of the helicopter next to my backpack, and I made a little bed full of rags," he says. "She would go back there and sleep while we were flying. She'd wake to greet the sol-diers coming into the helicopter, so everyone loved it when Lizzy was on a mission."

Since his wife and kids were back in the states, Gabriel poured his attention on Lizzy, who had become his "everything" during his deployment. Somehow he managed to keep her incognito for almost four months. But one day, during a routine flight, Gabriel got a frantic phone call from one of his pals saying that the dreaded moment had come: Lizzy had been found out.

"My pal told me, 'Some guys were here, they're looking for her. They want to put her down,'" Gabriel shudders with the memory.

A wave of fear flowed over "fearless" Gabriel—but then his years of training kicked in. He immediately sprung into action, beginning with contacting Puppy Rescue Mission.

"I was panicking like a frantic father. Puppy Rescue Mission told me, 'Get her to Kabul, and we'll have somebody meet you there at the airport, and then from there on it's like home base. She's safe, nobody can harm her.'"

With the help of his buddy, Gabriel smuggled Lizzy in a helicopter off the base. "When we got to Kabul, one of the Puppy Rescue Mission staff members met us at the Kabul airport, and that was that."

Gabriel agreed to their quarantining Lizzy for 30 days at the shelter. She was so little they couldn't ship her until she grew, and so they kept her for a good two months until she was big enough and Gabriel was able to make arrangements to send her home.

By the time she reached Gabriel's home in Nevada, Lizzy weighed almost 25 pounds and had extremely long legs. Gabriel couldn't leave Afghanistan, but he called his wife and explained there was a new mem-ber of family, "a little girl," who would be there any minute. When she went to pick up Lizzy from the air-craft, Gabriel's wife says her heart opened, adding, "I felt she was our daughter."

When Gabriel came home from Afghanistan, he realized there were a lot of soldiers like him with similar pet rescue stories. So he decided to help the organization that helped him.

"To return the favor to Puppy Rescue Mission, I'm like, 'Give me a holler anytime you need me!'" That's how Gabriel got started on his new search and rescue mission: flying helicopters in Afghanistan to help pets get a new life.

One of the first things Gabriel did upon Lizzy's arrival in the U.S. was to get her pet insurance. "I told my wife, 'I don't want anything to happen to her.'"

When Gabriel started comparing Nationwide pet insurance with other carriers' policies, he realized that Nationwide covers a lot of things that the other ones don't.

Gabriel explains, "More coverage, that was the selling point. I got Nationwide pet insurance because Liz-zy's the world to me, she's everything to me, so I want the best for her."

Nationwide extends our deepest thanks to Gabriel—and all the current and former members of our mili-tary—for their service to our country.

The Puppy Rescue Mission, Inc. (TPRM) raises funds for and assists in pet rescue as well as pet foster placement and re-homing, when needed. In particular, TPRM helps the pets of soldiers, es-pecially those deployed in war zones.

Find out more about Puppy Rescue Mission at puppyrescuemission.com.