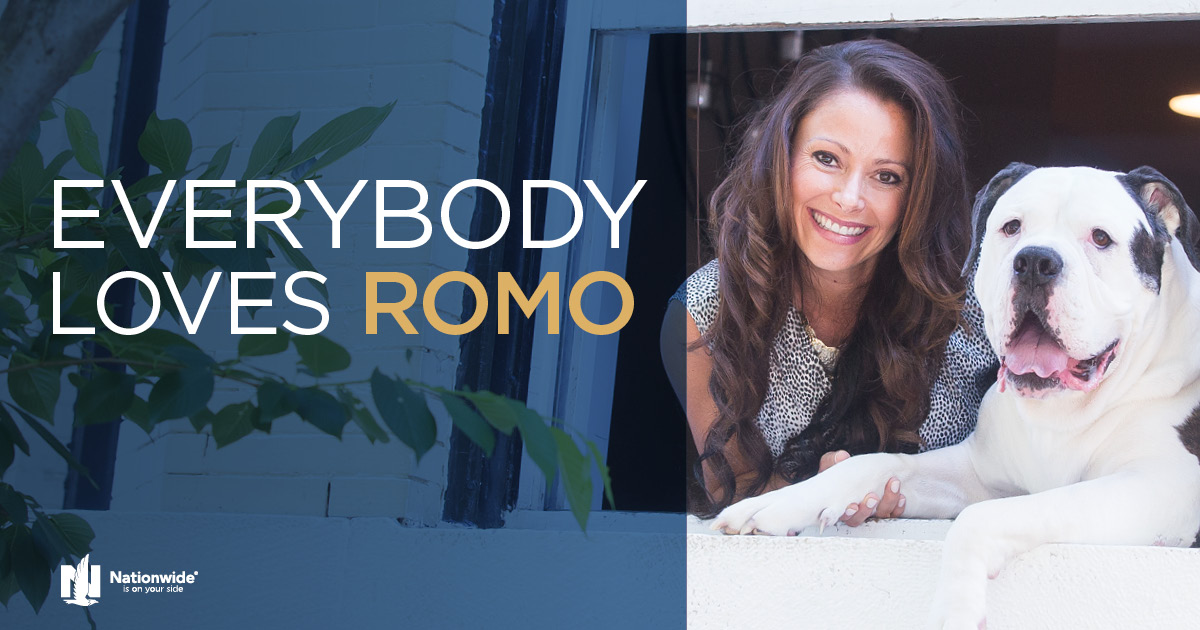 Tiffany Bacon grew up with pets.

"They've been a huge part of my life since I was little. Whenever I saw stray dogs, I always had to hug them and love them and feed them. I'm 37 years old and I can't imagine going the rest of my life without having dogs," she remarks.

"Home" today is outside of Washington, D.C. Originally from California, Tiffany has been in D.C. for 18 years. She arrived in the area to attend Georgetown, but stayed for the city.

"Everyone in this city seems to have a dog … people are just really neighborly and friendly and everyone knows each other and their dogs–it's a great city," she says.

With Romo by her side, Tiffany explains how he came into her life.

"I was looking into getting a bigger dog, and a few people knew that I was looking around," she recalls. "One of our friends found him at a rescue shelter, after he had been left outside in the worst snowstorm in D.C."

"He just knocked on my door and had a little box in his hands and said, ‘I got you guys a gift,' and there was this four week old Romo on death's door. He was huge already, and I fell in love with him," gushes Tiffany.

She took him in and bottle–fed him, as she knew it was too early for him to be away from his mom. She named the puppy Romo, she laughs, because she lost a bet to his "father" and co–parent, a die–hard Dallas fan. As a Redskins fan (and former Redskins cheerleader) Tiffany admits, "Now, I couldn't imagine him having any other name. I love my Romo. Not Tony Romo, but this Romo!"

Through sickness and in health

As if life weren't rough enough for baby Romo, after just a few weeks home with his new mom, he came down with parvo. Canine parvovirus is extremely contagious to other dogs and is spread through contact with infected feces. Though the disease can be prevented with vaccinations, if contracted it's almost always fatal—especially in puppies without fully developed immune systems.

Tearing up at the memory, Tiffany says, "It was the hardest four weeks of my life because he was so sick. I went to the vet every single day to visit him, and one weekend they said that they didn't think he was going to make it. I asked if I could take him home for the weekend.

"I brought him home that weekend, and I forced him to eat," she continues, voice quavering. "We had to go to the vet a million times—but he got better and nine years and 150 pounds later, he's a healthy boy."

A view from the top

Romo has always loved hanging out in opened windows. On one occasion, he even jumped through a window that he thought was open but was actually closed. The mishap left him with a hurt leg—and left Tiffany thankful Nationwide was there to help with the hefty vet bill.

Not long after moving to a new home, Romo was drawn yet again to an open window. As Tiffany watched nervously, the 150–pound dog hopped up on a stool and casually began to hang out of the opening.

"I was petrified he was going to jump out of the window, and he just kind of laid there on the ledge and just enjoyed people walking by," she says. "I was nervous [but] I was like, ‘Okay, I'll just let this go for the day,' and the second we shut that window, he was just barking every other day until we would open it back up so he could sit up on the window."

Romo was insistent upon his routine—and it was set.

From pane to fame

As days passed and Romo continued to gaze upon the passersby below, Tiffany relaxed when she realized that he had no intention of jumping out. He seemed to know exactly what he was doing: sitting on his stool and watching the world go on below. And then, Tiffany says, she noticed he was getting some attention.

"People started taking pictures of him," she explains. "At first, one or two people ... but now, I'm not kidding, I think maybe tens of thousands of people have taken photos of him outside of that window. Someone started a blog for him. Someone started a Facebook and a Twitter page for him. He's been in the news. My friend was a couple cities away and was in this little boutique and he saw a picture of Romo that they were selling for over a hundred dollars! It's crazy. Even the bus drivers who stopped below knew him. They're like, ‘Hey, Romo!'"

She goes on, "Some people told me, ‘I go running every morning. I look up and just see your dog just sitting there smiling, like looking down on everyone, and it just always makes me happy.'"

A new brother—and a new view!

Tiffany, husband Peter, and Romo now have a new pack member: Baby Xander. With the arrival of Xander, the family moved to a bigger place.

"When we were looking to move, all I cared about was that Romo was happy in the home and had a space that he could enjoy and a window. Anything he needs we make sure he's got," explains Tiffany. She goes on to say, "People were actually sad that he was leaving. So before we moved, we put a little sign under the window that said, ‘Thanks for the memories.'"

Tiffany says that with the birth of Xander, Romo somehow matured. "I find myself leaning on him," she says. "I often find myself saying, ‘Romo, watch Xander while I fix his food.' And I feel like Romo does just that. He will follow Xander around and that gives me comfort."

Romo does everything that the family does—and that includes enjoying holiday festivities.

"He gets a special holiday meal. He gets presents. He gets extra love and attention as the holidays are all about appreciation—he's there for it all!" Tiffany says. "Romo is and always will be an important presence in our home. He's a member of our family and it wouldn't be the same without him."

From his touch–and–go beginnings as a sick, abandoned puppy, Romo's unlikely journey led not only to celebrity but, more important, a family to call his own. With that loving support and a lofty perch, he's sure to find a way to watch over the world—no matter where he roams.