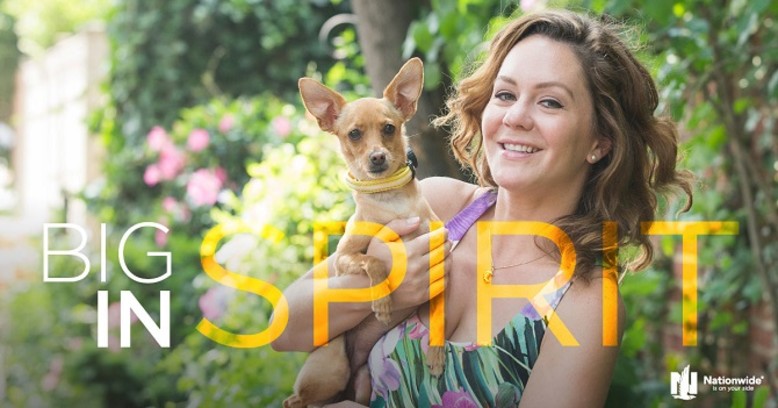 Some small dogs are timid and shy. But Maggie Barr’s pocket-sized dog Roo was born with big-dog spunk.

Maggie had wanted a dog for a long time. She’d grown up with dogs, and felt like something was missing from her life by not having one. She wasn’t having any luck finding “the one” until a stranger changed everything.

Fate found Maggie, who lives in Washington, D.C., while she was visiting a friend in L.A. She’d visited several private animal rescues during her stay and still hadn’t found her dog. Then she pulled up to the last animal rescue on her list.

“About a minute before I arrived there, a lady had walked up trying to drop Roo off,” says Maggie. “The animal rescue didn’t accept dogs in that manner, so the lady walked right up to me and said ‘Do you want this dog?’ and handed her to me. In that moment I was like, ‘Wow, my dog just found me.’”

A race against time

Because Maggie was heading back to D.C. that night, things got a little hectic.

“My friend and I rushed her to the vet, got her checked out, got her papers, got her a ticket on the flight home with me, and got her a carrier. Literally hours after the lady handed her to me, she was on a flight back to D.C. with me.”

The fast and the furry-ous

Maggie says Roo got her name because she looks like a kangaroo and sometimes she bounces when she runs. Roo’s unusual Chihuahua-Italian greyhound mix makes her very lightweight—and very, very fast. In fact, she even outruns German shepherds at the dog park.

“It always makes people a little bit surprised once they see that,” laughs Maggie.

Though Roo weighs in at just six and a half pounds, Maggie says she’s the most protective dog she’s ever had.

“She will literally set up guard around me if she thinks I’m being threatened in any way and she’ll do the same for my friends. One time at the dog park, a chocolate Lab came running up to me trying to get me to throw the ball to him and she thought this Lab was trying to attack me, so she got right in that Lab’s face, scared it off and wouldn’t leave my side for the rest of the time we were at the dog park. It’s just nice to know I have my own little personal bodyguard.”

This vet bill had teeth

One day, while Roo was playing with her best friend, Tobias, Maggie noticed a piece of a tooth on her sofa. At first she thought it came from Tobias.

“I checked his teeth and his were fine, and I checked Roo’s teeth and I found a spot where her tooth had broken off,” Maggie recalls. “I could literally see the pulp of her tooth; it was one of her major molars. If I hadn’t found the piece of tooth, I don’t think I would have known that she had broken her tooth.”

After a full set of X-rays, Roo ended up having the tooth removed entirely, plus another tooth. Maggie feels lucky that she had Nationwide pet insurance to cover most of the hefty $1,500 bill. But through it all, the only thing she cared about was getting Roo the best care possible.

“I was fortunate enough to get that done and make sure that her mouth could be as healthy as possible.”

Walk the walk and talk the talk

Having insurance gives Maggie peace of mind, knowing she can take Roo to the vet no matter what.

“There’s really a lot less hesitation for me, as a pet owner, to take her to the vet because of costs,” she reflects. “I always knew Nationwide had my back, and would definitely have Roo’s back.”

These days, Maggie finds herself recommending pet insurance to every pet owner she meets.

“I spend a lot of time at the dog park with Roo,” says Maggie, “making sure she gets the exercise she needs. While she’s off getting exercise, I’m there talking to the dog owners. Everyone always wants to talk about their dogs’ ailments, so ultimately I end up asking them if they have pet insurance and why it’s a good thing to have it. You never know what’s going to happen, so it’s better to be safe than sorry.”