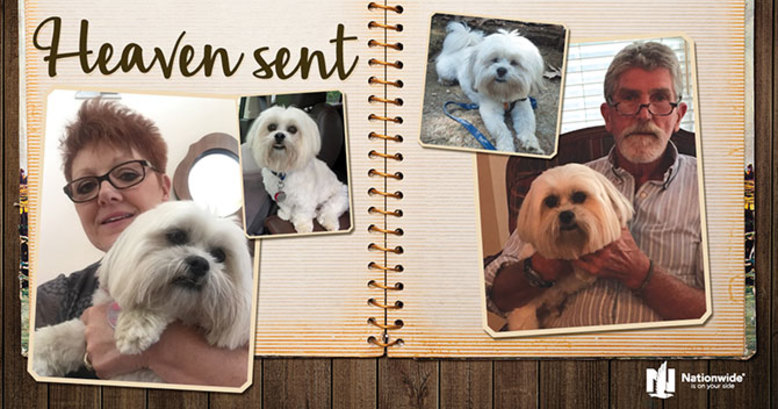 Nationwide member Teri Moerschel hadn't had a pet in 24 years. It simply hadn't been in the cards, considering her late husband’s severe allergy to dander. But nearly a year to the day after her husband passed, Teri received a gift she never expected.

From leftover to loved

While on a lunch excursion with her cousins, Teri was approached by a woman asking if anyone could give her puppy a home.

"She had big tears in her eyes and she said, 'My husband says I can't take him home.' He was 12 weeks old and he was the only one that didn't sell," Teri says.

One of Teri's cousins agreed to take the puppy, but things didn't quite go as planned.

"We walked in with this dog and [my cousin's husband] said, 'That dog is not staying here,'" Teri recounts, explaining how she wound up with the pup she'd eventually name Bogey. Little did she know how much "that dog" would end up meaning to her.

'I'm glad you're here because no one would believe me'

"So we get to the cemetery. And my husband is buried at the very back. There's lots of stones back there," Teri explains. "I had Bogey probably a whole 16 minutes at that point. I open the gates and I let him down and he started running—and I mean running. I thought, 'Oh no, he's going to run off!' And he ran down, as God is my witness, he ran down and he sat on my husband's stone."

Improbable as it seemed even as she was witnessing it with her own eyes, Teri stood speechless while Bogey sat rooted to the gravestone.

"My cousin Barbara said, 'Look at this, Teri, look at this. That's a sign that you need him,'" recalls Teri. "I told her, 'I'm glad you're here because no one would believe me.' If I had told them, they would think I was a grieving widow or something."

She continues, voice breaking, "Even my dad–he just died a few weeks ago–said, 'I think that man gave him to you. He knew.'"

Needless to say, Teri knew right away that Bogey was a keeper. And while he wasn't her first pet, he was certainly the first dog to make such a big impression on her heart. "We had dogs growing up as kids, but we never had an inside dog," she says. "So I didn't know how much they could mean to you because . . . we only saw them when we went outside. They didn't eat and breathe and sleep with us, you know?" Little did she know how much one small dog could affect not only her life, but also the lives of others, until one fateful spring morning last year.

The rescued becomes the rescuer

One of the trees in Teri’s backyard had died over the winter, so she asked her landscaper, John, to replace it once the weather warmed up a bit. He arrived on a drizzly Friday morning with a new blue spruce in the bed of his pickup truck, ready to be planted, and got to work. Meanwhile, Teri was getting ready to run out for a few hours when she noticed Bogey barking much differently than normal. "All of a sudden I heard him bark at the front door, and I just thought it was John. When I went to the door, no one was there," Teri recalls. "[Bogey's] a barker, so I just thought he saw something. As I was gathering my purse and getting my jacket, he came and jumped on my legs and started barking aggressively. I mean, really barking aggressively, and ran to the back door." Teri followed Bogey to investigate his strange behavior when she saw John sitting on the ground. Not knowing what had happened, she opened the door to his cries for help. "I couldn't see where there was a problem until I got there," she says. As it turned out, John's legs were pinned by the 900-pound tree. "He was in the bed of the truck and he was dragging that big tree to the edge of the tailgate," Teri explains. "It was supposed to just fall into the [hole]. . . . But he slipped and fell into the hole as the tree fell off the tailgate." John was pinned so tightly by the bulb of the blue spruce that he couldn't move his legs at all, much less wriggle free. Teri called a neighbor for help and, with considerable effort, the two of them were able to shift the tree just enough for John to get his legs out. "I'm just so proud of Bogey because he just was watching him the whole time," says Teri. "I was literally walking out the door and Bogey knew it. And man, he came to me just barking. It wasn't the normal bark. . . . I knew something was wrong."

Shout out to the little dogs

Grateful for his unlikely rescuer, John remarked to Teri, "Who would have ever thought a Maltese would have saved me? It's usually a German shepherd or some big dog, not some little 10-pound Maltese." Even his wife, a nurse, agreed that he could have suffered serious damage had Bogey not sounded the alarm. "Maltese need their shout out because they probably don't get very much recognition like the big dogs do," says Teri. "Maltese lovers need to know that they're special too."

Paying homage to their unlikely beginning

It's been three years since Teri first met Bogey, and the two of them have settled into a comfortable life together. She often goes back to the little country store where it all started. "Every time I go in there, I take Bogey inside and I ask the owner, 'Do you remember the woman that came in here with this dog?' Because I would love to call her and thank her. But somehow I hope she knows."