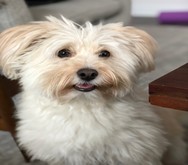 Justice has been served!

As huge fans of U.S. Supreme Court Justice Ruth Bader Ginsburg, Emily Mccabe and her husband loved the idea of naming their dog in her honor.

“We love RBG, we love Justice Ginsburg and we thought it would be funny and punny if we [named our dog after her] so it was a way to honor her,” says Emily. “He’s also a very tiny dog, so [it’s] a very big name.”

His punny name has secured Ruff Bader Ginsburg a nomination for the Wackiest Dog Name of 2019. When asked about reactions to the name, Emily said people generally think it’s hilarious.

Encouraged by her brother-in-law and sister-in-law, Emily got pet insurance through Nationwide for Ruff Bader Ginsburg. “[Our in-laws] have pet insurance for all of their dogs and they’ve raved about it. We have had to use Nationwide pet insurance and it has been awesome so far.”