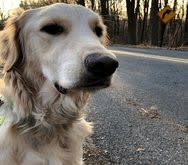 This four-footed DJ moves to a beat of his own

Once upon a time, Stephen Piechota thought of an ingenious name for a cat: DJ Meow Mix. Only problem was, he didn’t have a cat, nor did he want one. However, he did have a dog—and gave him the equally clever name DJ Skribbles and Bits.

When asked how people typically react to the name, Stephen says, “most pawsitively.” Clearly Stephen has a way with words, and his dog’s unusual name has earned a nomination for Nationwide’s 2019 Wacky Pet Name competition.

Noting that he’s never had a pet with a common name, Stephen suggests that new pet parents think outside the box when naming their pets. “Be unique but not something that makes it hard to discipline them without laughing,” he says.

Because trips to the vet can be unpredictable and costly, Stephen and his family made sure to get pet insurance. Fortunately, DJ Skribbles and Bits hasn’t had any major issues so far, but Stephen has put his wellness coverage to good use. “It has helped me be able to afford his flea and tick medicine,” he says.