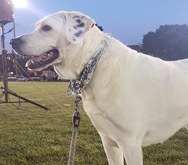 He may not be an archeologist, but Indiana Bones can find adventure all on his own

Being from Indiana and a big football fan, naturally Justin Spring wanted to name his dog Dallas Clark, after the Indiana Colts tight end. Unfortunately, his girlfriend at the time wasn’t too fond of the name or the sport. After settling on the name Indiana, Justin suggested adding “Bones” for a little extra flair.

According to Justin, “The compromise was we could name him Indiana and my response after that was, ‘What about Indiana Bones?’ It just kind of happened pretty organically, and it just stuck.”

The name stuck with us, too, which is why Indiana Bones will raid the 2019 Wacky Pet Name nomination list in hopes of securing the win.

“It definitely takes a few seconds [for the name] registering with people, but you can kind of see the gears turning in their head and when they recognize it, they laugh or whatever,” says Justin. In addition to the laughs, he and friends spend quite some time volleying dog puns back and forth.

For Justin, Nationwide pet insurance is offered as a voluntary benefit through his employer, so he made sure to sign up during his enrollment period. “I take him to a daycare, so he has to be very on top of his shots…and [pet insurance is] the best thing I could have for that.”