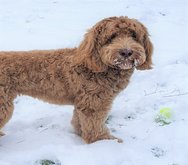 As huge fans of the “Harry Potter” series, Jessica Barlas and her husband naturally had several Potter-themed names in mind when they brought their new puppy home.

“One of our all-time favorite characters is the headmaster of Hogwarts, Albus Dumbledore—whose name lends itself to dog puns pretty easily,” laughs Jessica. “We actually had a list of four or five names, but he responded to Albus Dumbledog the most.”

The distinctive name earned Albus Dumbledog a nomination for Nationwide’s Wackiest Dog Name of the year.

The Barlases purchased Nationwide pet insurance for Albus Dumbledog because despite his magical name, he still lives in the Muggle (that is, non-magic) world and is susceptible to accidents and illnesses.

“We wanted to make sure that our puppy was well-covered for anything unexpected for his first year of life,” says Jessica. “[Nationwide has] reduced the amount of out-of-pocket expenses with reimbursement for all the regular routine immunizations and checkups for the first year, as well as all the unexpected illnesses and infections we’ve encountered thus far!”