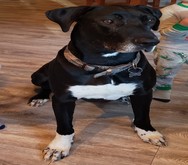 As they walked around the pound, David Hoffner and his wife were instantly drawn to a black and white dog named Captain Morgan. After noticing the white speckles of hair around the dog’s mouth, David told his wife that the only condition for taking the dog home was adding the name “Freeman” in honor of the legendary actor Morgan Freeman.

According to David, people love the name and have lots of fun with it. From shouts of “Captain” to drawling impersonations of the actor’s trademark voice, he’s heard it all—and he and his family enjoy the jokes and comments.

As captain of the pack, it’s only fitting that Captain Morgan Freeman has made this year’s list of Wacky Pet Name nominees.

David signed up for Nationwide pet insurance after having to make difficult decisions with a previous dog who wasn’t insured.

“We won’t have another pet without pet insurance,” he says.