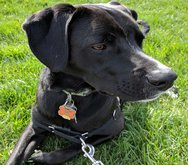 Nostradamus himself could not have predicted this!

When Hudson Harper and his wife happened upon a shelter event at their local PetSmart, they couldn’t take their eyes off one particular pup. Discussing it as they walked the aisles shopping for cat food, the couple decided to take the dog home.

“I was trying to think through what would be some good creative names for him and just happened to stumble across Nostradamus,” says Hudson, referring to the 16th-century French astrologer and physician. He and his wife eventually settled on calling their new pup Nostradogmus, or Nas for short.

Nostradamus himself could not have predicted his canine namesake making the 2019 Wacky Pet Name nomination list!

The Harper family purchased pet insurance from Nationwide to be the best pet owners they could be. “We just wanted to make sure we take care of him. [You] never know what can happen,” says Hudson. “We do his annual vet checkup, so we use it for that.”