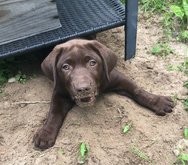 Knocking it out of the park, Big League Chewie is nominated for the Wackiest Pet Name of 2019

Though Chewie the chocolate Lab was originally named after Chewbacca from the “Star Wars” movies, Jennifer Kanaly thought a name that was more in sync with her family’s love of baseball would be a better fit. After all, her other dog is named after the Bronx Bombers (a.k.a. the New York Yankees).

“We were kind of playing around with him in the yard one day and I’m like, ‘Oh, we really should just stick with the baseball theme,’” says Jennifer. “So, it’s Big League Chewie after the gum.”

Baseball fans love the reference, according to Jennifer, and usually get a good laugh when they hear it. As such, this catchy name has landed Big League Chewie on the Nationwide Wacky Pet Name nomination list.

As good pet parents, Jennifer and her husband felt compelled to get Nationwide pet insurance because for them, their pets are like children.

“Our animals are our family,” says Jennifer. “I feel like a really good, responsible pet owner and I never want to make a decision about money and the health of our dogs,” she says. “The peace of mind I get having the insurance is wonderful!”