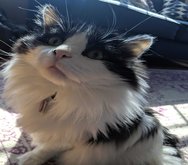 Though bringing home a kitten was a bit unexpected, Benjamin Rogers and his fiancée had no trouble coming up with a clever name for their new family member. Since his fiancé is a major fan of the hip-hop group Wu Tang Clan, Wu Tang Cat seemed to come naturally.

According to Benjamin, reactions to the name can go one of two ways.

“Usually people are really excited because they know what Wu Tang Clan is—or it’s just confusion,” he says. He suggests that new pet owners be imaginative when naming their pets but also be mindful of the spelling.

“Be creative; [it] should be something that’s memorable but also something that’s easy to spell because if you have to fill it out on a form or anything, it can get complicated,” he laughs.

We think the name is a smash hit, which is precisely why it has earned Wu Tang Cat a nomination for Nationwide’s Wackiest Pet Name of 2019!

As a responsible pet parent, Benjamin made pet insurance for Wu Tang Cat a priority. “I wanted to make sure that with my new baby kitty, if something were to come up, I’d be able to pay for it,” he says.