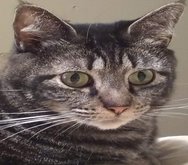 You can usually find this cat under the table and dreaming

As long-time fans of the Dave Matthews Band, naming their cat was a no-brainer for the Davis family. Giving all the credit to his wife, James Davis explains that she’s the one who named their cat Dave Meowthews.

“It was my wife; she’s a big fan of the band so we kind of combined it,” James says.

While DMB is a Grammy-nominated band, we think Dave Meowthews will appreciate his nomination for 2019 Wackiest Pet Name for cats.

With such skill in the naming field, James recommends naming your pet something original. He goes on to advise, “Name your pet whatever [you] like, whatever [you] think will fit the pet.”

Being a responsible pet parent is important to the Davis family and as such, they made sure to get pet insurance for the wellbeing of their cat. “We got pet insurance to keep her healthy,” says James.