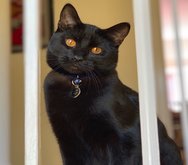 In a galaxy not so far away, Boba Fetticini rules his empire

With a family full of “Star Wars” fans, Martin Crawford-Jakubiak and his kids didn’t have to think long about what they were going to name their cat. They already had a cat with a name inspired by the movie franchise and wanted to name their new kitty something similar but distinguishable.

“We have another black cat named Jango Fett,” says Martin. “The twins came up with Boba Fett but they wanted to make sure we could distinguish between the two Mr. Fetts, so they decided to name him Boba Fetticini.”

While there’s no bounty to collect, this playful name has landed Boba Fetticini a nomination for Nationwide’s Wackiest Pet Name of 2019.

With an abundance of “Star Wars” fans in this galaxy, Martin says the response to the name is typically positive. “People seem to think his name is funny and everyone laughs when we tell the story. True ‘Star Wars’ fans love the name,” Martin says.

As a veterinarian himself, Martin is a true advocate for pet insurance.

“I know the importance of having pet insurance,” he says. “Caring for our pets is expensive.”