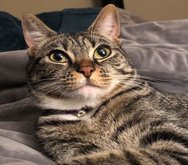 Recounting his thought process when coming up with cat names, owner Jon Resnick describes a dramatic scene from the popular animated series “Final Space” that resonated with him, swaying him to call his cat Avocato.

“It was a character I liked on the show, he was funny,” Jon said. “He ended up sacrificing himself to save his kids [and I thought] this is a good character and a good name.”

We thought it was a good name too, which is why Avocato has landed on our 2019 Wacky Pet Name list.

When asked about how to choose a good name for your pet, Jon has a few suggestions. “Think about things that matter to you and people or characters you respect. [Think about] qualities you enjoy that might correlate or reflect what you see in [a pet].”

Jon got pet insurance for both of his adopted kittens and has already seen the reward for being insured.

“I know that it can cost a lot to take good care of your pet,” he says. “I want to be able to get the cash back to continue to give the care and love that my pet needs.”