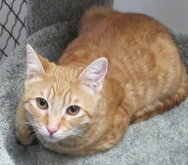 He won’t be starring in Legally Blonde 3, but this cat’s got style!

After the passing of her childhood cat, Kaitlyn Sanders knew she’d have a cat of her own one day, and what’s more, she knew she’d name it after her favorite actress, Reese Witherspoon.

“I actually came up with [the name] randomly in high school,” Kaitlyn says. “I was talking to my mom about how I wanted my own [cat] when I moved out and I was going to name her Reese Whiskerspoon.”

Fast forward some years and her dream was fulfilled … kind of. While Kaitlyn did get her cat, it ended up being a he and not a she. That didn’t deter her from the name she’d always wanted for her cat, though she goes on to say, “My husband made me spell it with a ‘c’ so it was more masculine.”

Elle Woods would be proud of the wit put into this name, which is why Reece Whiskerspoon has made his way to our 2019 list of nominees for Wackiest Pet Names.

Seeing her mom pay thousands of dollars out of pocket for her childhood cat’s healthcare, Kaitlyn enrolled in Nationwide pet insurance through her employer. “I got the most coverage so that if anything were to happen to him like what happened to my childhood cat, I would be fully covered.”