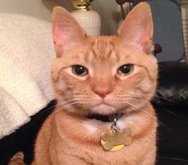 Tara Krogstad’s big orange cat is named after a comic strip character—but not the one you’re probably thinking of. We don’t know how Shtinky Puddin feels about Mondays, but we do look forward to seeing him each day in the popular comic “Mutts.”

The unique moniker has earned Shtinky Puddin’s real-life namesake a nomination for Nationwide’s Wackiest Pet Name of the year.

Like that other famous cartoon cat, Tara’s Shtinky Puddin does love to eat—though his appetite is less for lasagna and more for things that are off-limits. Fortunately, he’s protected with a Nationwide pet insurance policy.

“We’ve been with [Nationwide] since we adopted our first furry family member,” says Tara. “We wouldn’t go without! Shtinky has a tendency to eat and do things that he isn’t supposed to do. From abdominal surgery to illnesses to regular checkups, Nationwide has helped us!”