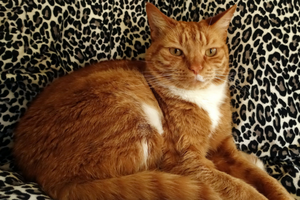 After losing her previous cat, Loretta Majoy of Huron, Ohio, was devastated by the loss and eager to fill an empty void in her family. One year later, a co-worker aided her efforts when her cat had kittens who needed a loving home. Loretta met and adopted an American shorthair kitty and immediately started on the search for a name.

Years prior to adopting her newest companion, Loretta had an acquaintance named Edward who they would often jokingly refer to as 'Edward Scissorhands,' and the name seemed to stay with her, even years later.

Loretta is no stranger to pet insurance and purchased Nationwide policies for Edward Scissorpaws and his two sisters, Jinga and Bola Taiwo.

"I recommend pet insurance to all my friends," said Loretta. "It helps me protect myself and my pets for those unexpected veterinary expenses that you can't plan for."