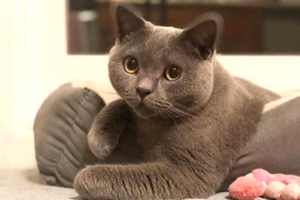 When Kim Kamitaki and her boyfriend Mark May of San Francisco, California, decided it was time to bring an animal into their lives, neither of them was expecting it to be as easy as it was. The couple met and adopted a 2-month old British shorthair, and have been smitten with the kitten since day one. With outside influence from an HBO favorite and an old school rapper, the couple decided on the ultimate name for their cat.

Mark and Kim were tossing around different names for their kitten when they unexpectedly found the name that brought immediate laughter and they knew it was the winner. Mark wanted to name the kitten Ser Pounce, after the cat in the series "Game of Thrones," while Kim was suggesting Pounce as a nickname. The rest is history.

"I liked Pounce as a nickname in case he was a frequent pouncer, which led Mark to his suggestion of Sir Pounce a Lot as his name," said Kim. "I loved that name because of the rapper, Sir Mix-a-Lot, but Mark didn't connect the dots until I sang his song 'Baby Got Back.' We both immediately started to laugh, and we knew Sir Pounce a Lot was his name."

Sir Pounce a Lot has certainly lived up to his name by pouncing all around their home and even on them when it's time to leave. The couple, who was new to living with cats, did such a phenomenal job of training Sir Pounce a Lot, that he even knows how to use the toilet.

"Mark trained him how to use the toilet and it actually worked," said Kim. "There are times when I'm home alone and get scared because I can hear someone using the toilet. Then I look over and see it's Pounce and laugh."

Knowing the cost of owning a pet, inclusive of unexpected expenses, the couple knew purchasing pet insurance was a smart decision.

"It's been so beneficial and has made a huge difference for us," said Kim. "We're so glad we signed up for Nationwide when we did."

Mark May and Kim Kamitaki Nationwide members since 2016