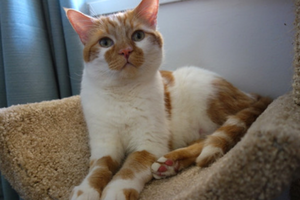 When Samantha Bent and Paulo Vieira of North Hollywood, California, decided it was time to bring a cat into their lives, they knew exactly what they wanted, an orange kitten. The couple went to Sante D'Or, a local shelter in Los Angeles where they met a 6-year-old Domestic shorthair cat and knew he was the one. After bringing him home, the couple set a goal to come up with a name that was regal yet ridiculous and would fit their unique feline. After a week, the kitty was crowned with the name Sir Reginald Fluffybutt.

Samantha and Paulo started the naming process with the name Reggie along with several other monikers that did not make the cut. The couple knew they wanted his name to be prestigious and expanded on the name Reggie. The couple agreed on Sir Reginald, but felt that it was still not quite fitting for their silly cat. They put their thinking caps back on and looked to their cat for more inspiration, which led to the second half of his name, Fluffybutt.

"Reggie has a fluffy face and butt, so we jokingly called him Fluffybutt," said Samantha. "When we verbalized the name, it sounded really silly, but Reggie's a silly cat so we knew it was perfect for him."

The couple immediately purchased pet insurance from Nationwide for "Reggie" and his sister, Impurrator Furriosa, soon after adopting them.

"We love having pet insurance," said Samantha. "It's comforting to know that if anything goes wrong, we can take them to the veterinarian with no hesitation."