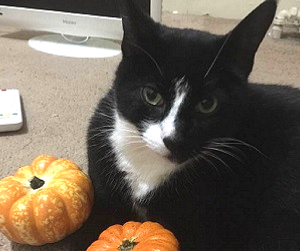 Growing up, Akudo McGee of Philadelphia, Pennsylvania, continuously pestered her mother for a cat but was typically rebuffed due to her mom’s allergies. One day, however, things changed when a family friend had kittens that needed a home. Akudo was napping when she woke up to find a tiny tuxedo kitten lying on her lap and was overcome with excitement.

"I was twelve years old when I got him," said Akudo. "I really loved the name Banana for him, even though he’s a tuxedo. Eventually, I started calling him Banana Paws, but I still wanted his name to be more unique."

Akudo quickly changed the spelling of his name from Paws to Pawz and that seemed to do the trick. Even after trying an array of other names that matched his color pattern, Banana Pawz was the only name he responded to and that truly fit her cat.

In the years that Banana Pawz has been in Akudo's family, he has grown to be a compassionate, kooky and affectionate cat, who likes to steal food on occasion. Akudo recalls a memory from when "B-Pawz" was younger and attacked a wooden post in her front yard. Unaware that it was her cat, Akudo watched as this animal attacked the wooden post only to claw up and dart from the post to her porch. It was in that moment that Akudo realized it was none other than her crazy little cat.

Akudo signed Banana Pawz up for pet insurance with Nationwide to help protect against veterinary expenses that may come to fruition as he ages.

"I appreciate the peace of mind I have with pet insurance coverage," said Akudo. "I'd rather have it and not need it than need it and not have it."