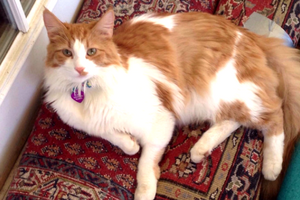 When Christina Palmer of Charlotte, North Carolina, added a new furry member to her family, it didn't take long to come up with a name, as she typically names her pets after famous painters.

Christina is an artist and an art instructor, so it's no wonder why all of her cats have been named after artists. Her previous cat monikers included Vincent van Kitty and Leonardo da Katty, and Christina made sure to keep her new kitten on point with the name Pablo Purrcasso.

Since joining Christina's home, Pablo Purrcasso has found himself fitting in perfectly with Christina and her entire art class.

"When I'm teaching my students, he likes to hang out," said Christina. "It's like he's part of the class. He'll follow the brush strokes of the students and stare at them while they're painting."

When Pablo Purrcasso isn't in art class, Christina can often find him acting as her personal alarm clock at home, by jumping on top of her in the morning and letting her know it's time to eat. Also an avid water lover, Christina finds herself leaving towels by the front door for those moments that Pablo Purrcasso wants to go outside and play in the water.

After Pablo Purrcasso had a medical scare at the age of only nine months, Christina realized how fragile he was and purchased a Nationwide pet insurance policy.

"I want the very best for Pablo Purrcasso," said Christina. "Having pet insurance provides me peace of mind knowing that Nationwide will be there to help offset future veterinary expenses."