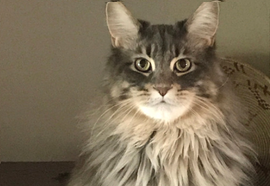 After Debra Shannon of Carefree, Arizona, got news of a newborn kitten that was ready to join her family, she and her grandsons wracked their brains to come up with a moniker for the Maine Coon kitten.

One grandson wanted to name the kitten after his favorite color, blue. The family dug a bit deeper to elongate the name and looked to where the kitten was born for inspiration.

"The kitten was born in England," said Debra. "Since he was coming from England, we thought of the title, knight, and combined that with blue to develop Blue Knight."

The next part of the naming process came from the kitten's breed with a hint of where Debra lived. Last, but certainly not least, the family looked to the kitten's ancestors for completion of the name. A history of Blue Knight's family was provided to Debra when she obtained him, and she learned that his grandpa was named Dior Blue and was a former breeder world champion. Debra put it all together, and thus the name Majesticoons Dior Blue Knight was materialized.

Debra purchased pet insurance from Nationwide after seeing that it was offered through her employer and also receiving a recommendation from her veterinarian.

"Having owned pets before, I know how expensive veterinary bills can be," said Debra. "The cost of pet insurance is a small price to pay when compared to veterinary expenses."