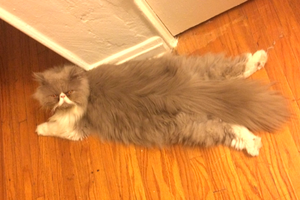 Naming your pet can be a difficult challenge, but for Amy Dresner of West Hollywood, California, the name came with just one look at her beautiful Persian kitten.

"His hair was puffy and he had this white mustache that reminded me of Colonel Sanders. In that moment I knew his name had to be Colonel Puff Puff," said Amy. "Our pets are with us a long time, so I think it’s important to have fun with their names."

Excited over her new kitten's name, Amy told her dad the news and received a reaction she wasn't expecting. While Amy thought the name was original and unique, it turns out she subconsciously heard that name somewhere before. Amy learned that her father had a childhood toy soldier, who coincidentally was named Colonel Puff Puff. Coincidence?

Since joining Amy's side, Colonel Puff Puff has been the best cuddle buddy she could ask for. While he's sure to make his way into her bed at night, he's also proven to find his way into the bathroom to sit on top of the toilet.

Amy knew from past experience that having pet insurance was very important, and decided to sign him up with Nationwide.

"I wish I would have purchased pet insurance sooner, but I learned my lesson," said Amy. "Having pets can be expensive and I know when the time comes, I wouldn't want to be without it."