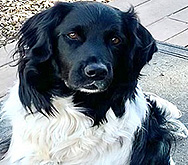 When Nancy Bosse brought home her Stabyhoun pup, she had no idea his registered name would have amassed him so much celebrity. Trillium Points Jacobs Ladder is in a league of his own, earning him a spot on the 2020 Wacky Pet Name nomination list. “Actually, our dog’s name was given to him by the people who had him as a puppy,” says Nancy. “They have a group of dogs and they name all the dogs by noting where they came from. In this case, it was Trillium Point and then all the puppies there were named after flowers, and his is Jacobs Ladder.” Though Nancy didn’t personally name this dog, she does have a total of three pets who all are nicknamed after famous artists. When it comes to naming your pets, Nancy suggests owners make sure all the names are different from one another. “If you have more than one pet, try and pick names that don’t sound like the other names so they know exactly who you are calling,” she advises.