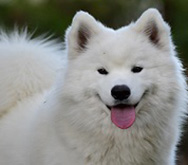 This crisp, refreshing name has landed Stella Barktois a nomination for wackiest pet name of the year, thanks to her parents’ creativity while on a trip in France.

“We learned from our breeder that she had a female puppy for us,” Denise remembers. “So that evening we were in the city plaza watching the French men's football team win the World Cup semi-finals match and people were drinking Stella Artois.  We had been talking about names all evening and we decided we liked Stella.  Then we said, "Stella Barktois!"

Besides having great taste, Stella is also very nimble and quite dominant. More than anything, she loves to sit in her owner’s lap when they watch TV.

A master moniker maker, Denise recommends first choosing if you want a practical name or not. “Decide if you want a human name or silly name, but remember you are going to be shouting that name at the dog park,” she says with a laugh.

Having a pet with health issues in the past drove the Raffel-Melli family’s decision to purchase pet insurance from Nationwide. “There’s an expectation, you’re going to do whatever it takes, you’re not going to just put it down. They are family members now.”