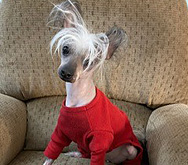 Kathleen Carter is a long time fan of Hollywood films. As such, she named her Chinese Crested dog, Scarlett No Haira, in honor of the famous actress from the hit movie, Gone With The Wind.

“She’s such a wild child,” says Kathleen. She notes that Scarlett was quite upset at the passing of another dog but when the family brought home a new playmate for her, the smart pup had a boost in her spirit. “She’s happy all the time now and wants to play all the time but she is still obedient,” she adds.

This fan filled moniker has earned Scarlett No Haira a spot on our 2020 Wacky Pet Name nomination list!

It’s not just Kathleen that’s a fan of the name, “When people hear it, they chuckle or tell us how awesome the name is.”

Kathleen tried to be creative when it came to naming her pet and would suggest other pet owners do the same. “Be creative and try not to name it something that someone else will have… you never know, it might bring about a conversation you never had before.”

After having their first Chinese Crested pass at 15 years old, Kathleen and her husband became more informed about the breed. “We knew they have a history of heart murmurs, so we made sure to get insurance for all of them going forward.”