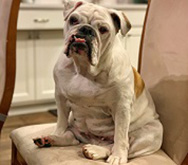 Meet the duchess of the dog park

This English bulldog deserved a name as esteemed as she, which is why Madame Squishy Van Wrinkleface has earned a nomination for our 2020 Wacky Pet Names competition.

Not only is she distinguished, but she’s also super lovable, “She is 100% pure love,” says Cassandra. “She wants to be close to you at all times.”

Madame Squishy Van Wrinkleface shares her love with her human sister Allie—but it wasn’t always like this. Initially, Cassandra says her dog had no interest in the baby. However, in just a few short years, they have become inseparable.

With a name like this you’d expect a curtsy when people meet her, but usually she is just met with smiles and laughs.

As the George family has had several pets with health issues, pet health insurance was a no-brainer. “The vet bills were over $10,000 for our bulldog-boxer mix; we knew we had to do something different this time around,” says Cassandra.