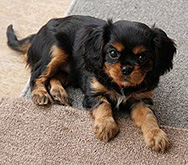 A name that’s nothin’ but net

Originally from the San Francisco Bay Area, Michelle Yee and her family are big time Warriors fans. So much so, she named her dog Andre Igoudogla, in honor of former Golden State Warriors small forward Andre Igoudala.

“We always loved Andre Igoudala the basketball player,” says Michelle. “We toyed around with a bunch of different names that would have a pun and we came up with this… we mostly call him Iggy though.”

Because Iggy was a rescue, Michelle didn't know much about him prior to his arrival, but he has brought her much happiness. “He was rescued from a puppy mill in New York and he’s a little bit of a scared-y pants. He doesn’t really like people, but loves other dogs and he’s such a cuddler with my husband and I.”

When it comes to introductions, Michelle and her husband often introduce him as Iggy. Most people think it’s in reference to Iggy Pop, but they’re pleasantly surprised when they get the full story. “So when we explain Andre Igoudogla, half know who he is and are super impressed and think its punny and funny—and half don’t get,” she says with a chuckle.

Usually, Michelle is a straight shooter when it comes to names and gives this credit to her husband. But she does recommend going with something unique and going with your gut.

The Yee family purchased pet insurance from Nationwide because they wanted to be the best pet parents they could. “It feels good knowing that if something were to happen, we would be covered,” she says.