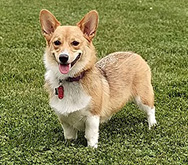 Named for the Maid of Corg-léans

Jorge and his partner never would have expected to discover their corgi’s name during an unexpected turn of events.

“We got lost out in the country on our way to pick her up,” says Jorge. “We had to pull into someone’s driveway to make a U-turn, and we noticed a suit of armor in the home. We had been going back and forth on names and when I saw the armor, it just came to us.”

Thus, they crowned their little pooch Joan of Bark, which is apparently quite fitting.

“She lives up to the name. Any little sound and she will go into full bark,” says Jorge. “But she is really sweet and lovely.”

Since Joan of Bark is a corgi, she has little stubby legs and often struggles to get on the couch, but Jorge recalls a moment of glory with his sweet dog. “Once she was able to get to the top of the ottoman and she was very proud of herself. She almost looked regal as she stood there feeling accomplished.”

As long-time pet owners, Jorge and his partner understand the importance of pet insurance. “We both had issues with our former pets that came with expensive medical bills,” Jorge recalls. “We wanted to make sure that when something happened, now we were covered.”