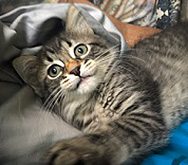 A charming little morsel with a spicy delight of a name

Megan and Cameron unknowingly added some spice to their life when they brought home their new cat, who they appropriately named Tika Meowsala.

“It wasn’t our first choice,” Cameron says. “I don’t entirely know how we got there, but we like Indian food and so we thought of Tika and then Meowsala just came… and she’s a little spicy.”

Cameron and Megan say their little cat always is on the prowl. “She always has an agenda—when other cats just hang around, she’s going somewhere with a purpose,” he says with a chuckle.

A part of this cat’s purpose must be the limelight, because this crafty moniker has earned Tika Meowsala a wackiest pet name nomination.

And we’re not the only ones who love it. Cameron says that people usually get a kick out of the name: “Most people get it right away and love it. Some people don’t, but Indian food is pretty popular here, so most people do.”

After a few routine visits to the vet, Cameron and Megan knew a pet insurance plan from Nationwide was the obvious choice. Megan says, “When it came time to get her shots and spayed, it was super expensive, we knew pet insurance was the answer.”