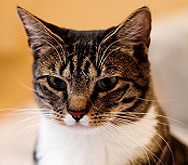 A jazzy name with a twist and a wiggle

Brian and Mishaal admit that they had a pretty difficult time thinking of a name for their new cat.

“With our first cat, Biscuit, it was easy,” says Mishaal. “We were really struggling though, and I don’t know how it happened, but just one day it came to me… Mingus Pookiebutts,” she says with a chuckle.

When Brian and Mishaal describe Mingus, their hearts sing. “He demands a lot of attention and he is very sociable and loving. He will follow us around and meow until we pick him up,” the couple says.

They go on to explain how he is the opposite and the less dominant to his older brother, Biscuit Hemingway, but he doesn’t let that stop him from standing up for himself when big brother pushes too much. “He’s on the fluffy side and he will just sit on Biscuit’s face, he’ll put his whole belly on his face.”

These especially cute monikers make Mishaal and Brian experts in the naming matter. They suggest observing the cat and then seeing. “Just let your pet bring out the kookiness in you and see what comes out of your mouth,” says Brian.

After Biscuit appeared to be a little sick after a stay with a cat boarder, Mishaal and Brian felt it best to get pet insurance. “It’s better safe than sorry,” Brian says. “You never know what kind of issues you’d run into.”