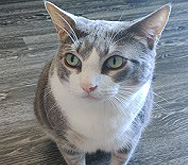 Desirea Smith was tickled when her brother suggested the name “Captain Sushi” for her newly adopted cat—and was even more tickled to learn that her feline’s unique moniker landed him a spot on our 2020 Wacky Pet Name nomination list! “I was having a hard time coming up with a name,” says Desirea. “My brother was the one who came up with Captain Sushi and when he suggested it, I laughed, and it stuck.” Captain turned out to be the perfect name for this independent cat who commands cuddles, loves cheese-flavored treats and playing tag with his sister, Buttermilk. “When he wants affection, he sits on whoever he wants pets from and stays until it’s given,” laughs Desirea, who adds that people always laugh when they hear his name and want to see if his looks match his name. Though she had fun with Captain Sushi’s name, a serious desire to be a responsible pet parent compelled Desirea to purchase a Nationwide pet insurance policy: “I wanted to get pet insurance in case of an emergency.”