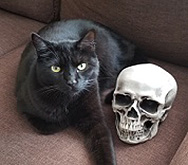 A name befitting the Tell-tail Heart

As lovers of all things macabre, it was fate that the Montoya family would name their little black cat Edgar Allen Paw after the famous Victorian horror writer Edgar Allen Poe.

“Funny enough, his personality fits the name perfect,” says Brian. “He’s a bit moody like any goth teen and he’s always on the prowl—sneaking around, ready to pounce on unsuspecting victims.”

This unique moniker has earned Edgar Allen Paw a nomination for wackiest pet name of the year.

Aside from his dark ambiance, Edgar also has an affinity for shoelaces. “That’s his thing, he will untie shoes all over the house,” laughs Brian.

If you are in need of advice when it comes to naming your pet, Brian recommends just going with what pops into your head or keeping an eye on things your pet reacts to.

The Montoya family never wanted to have to choose between their finances and their pet, which is why they purchased pet insurance from Nationwide. “Having pet insurance makes it easy to make a decision on what to do. They are part of the family and it eliminates having to make that tough call,” says Brian.