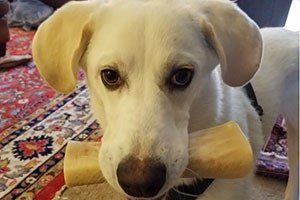 After adopting a homeless dog from a foster family, Peter Scherer of Southbury, Connecticut realized that the Great Pyrenees/Labrador retriever mix didn't respond to his given name. Originally found a few weeks before, alone and abandoned in a barn, the young male was given the name Axel, but wouldn't acknowledge it when called upon. Peter and the family knew they had to think of a new moniker, so they started studying the big dog for ideas.

"We came up with his first name after seeing him run around in the snow at our house," said Peter. "He looked like this big white furry animal running through the snow almost like a big Yeti. We started calling him that and he responded."

The second tier of Yeti’s name came a short time later during dinner when a plate of spaghetti spilled on the floor and Yeti gulped it up in seconds. From that day, the family has referred to him as Yeti Spaghetti.

Since donning the unique moniker, Yeti Spaghetti has adjusted perfectly into his new home. The family has helped rehab him back to a healthy weight and given him extensive training. Yeti Spaghetti loves playing with the kids and even has a bed time routine that includes bombarding their beds for a good night hug.

Peter purchased pet insurance from Nationwide for Yeti Spaghetti after dealing with major veterinary costs for his previous cat's battle with cancer.

"Our pets are part of the family," said Peter. "Having pet insurance allows us to seek the best veterinary treatments possible without stressing about the financial aspects."