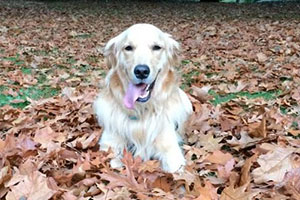 Nicole DePalma of Boston, Massachusetts wanted a dog her entire life, and when her wish was finally granted in the form of a 2-month-old Golden retriever, she wanted to give him the most memorable moniker possible.

"I think pet names should not only reflect the personality of the pet, but also represent the owner as well," said Nicole. "I put together elements from my own life and with the help of his veterinary office, I think we created the perfect name."

The first element of Dunkin Butterbean's name stands for one of Nicole’s favorite hometown treats – donuts. Specifically, "Dunkin" represents the name of Nicole's favorite Boston based donut shop. The second part of his name originated from the puppy's first trip to the veterinary office. When the staff laid eyes on the new puppy, they immediately remarked that the he looked like a little slab of butter sitting on the table. The last part of his extensive moniker stands for the city of Boston's nickname – Bean Town.

Since joining the family, Dunkin Butterbeans and Nicole have become inseparable companions. The goofy Golden is by Nicole's side for all of her adventures, which includes hiking, swimming, and cross country road trips. Nicole signed Dunkin Butterbeans up for pet insurance from Nationwide after the puppy suffered from a major medical mishap just two days post adoption.

"The day after I got Dunkin, he somehow got his paws on a BBQ skewer and attempted to eat it," said Nicole. "It was a terrifying experience and after that, I knew I had to get him covered. You never know what kind of accidents can happen with pets and it's nice to know that we're covered if something does occur."