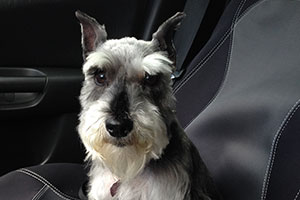 Jerry Rodriguez of Rancho Cucamonga, California always wanted a schnauzer, and after seeing a mini schnauzer puppy in need of a home, he decided to make an addition to the family. Jerry's 3-year-old daughter was fond of his brother-in-law's standard schnauzer named Chewy, so when he brought home the new puppy, the tiny toddler already had a name in mind.

"My daughter called Chewy, by the nickname 'Choo Choo,'" said Jerry. "When she first saw her new puppy, she must have realized that it was also a schnauzer and started calling her 'Choo Choo Boo Boo.' We decided to go with it and made it her official name."

Choo Choo Boo Boo has since grown into a loving member of the family who loves to play, and seeks attention from everyone she meets. Choo Choo Boo Boo doesn't let her tiny stature define her, and has become the self promoted guardian of her home, which has even prompted the family to hang a sign that reads "Schnauzer Guard on Duty."

The Rodriguez family signed Choo Choo Boo Boo up with pet insurance from Nationwide to make sure she would be covered for any future mishaps.

"Pet insurance has been great for us," said Jerry. "Choo Choo Boo Boo is part of our family and we feel like it's important that she has insurance just like we do."