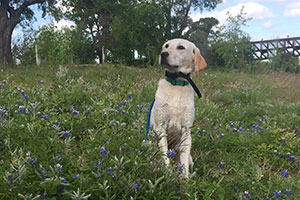 Katherine Warren and her family from Houston, Texas are no strangers to the Nationwide Wacky Pet Names competition. Two years ago their dog, Baron Von Furrypants, was voted the Wackiest Dog Name in America! So when the Warren's decided to bring a new female Labrador retriever puppy into the family, they knew she needed a moniker equally as impressive. The family started looking into famous figures from their native state that could be represented by the little Labrador's golden yellow coat.

"We wanted her name to stand on its own next to Baron's famous name," said Katherine. "Her beauty and yellow coat reminded us of another Texas blonde - Farrah Fawcett, so we put the two together, and the name Farrah Pawcett was created."

Since obtaining her movie star moniker, Farrah Pawcett has fit into the family perfectly, despite her habit of attempting to ingest anything she can get her paws on. She enjoys playing non-stop with Baron Von Furrypants, but has a tendency to steal his toys - including some of Baron’s prizes from his Wacky Pet Names victory.

The Warrens signed Farrah Pawcett up for pet insurance from Nationwide after experiencing its benefits with Baron Von Furrypants.

"Pet insurance was a must for Farrah," said Katherine. "She's a Labrador so she tries to eat everything and having Nationwide assures that we'll be covered for any future mishaps."