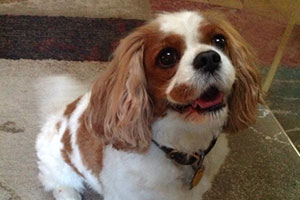 Alasdair and Harriet Seth of Dallas, Texas have raised generations of Cavalier King Charles Spaniels over the years. The couple loves the breed’s temperament, and is keen to their impressive intelligence. To honor their dogs' heritage and reflect their nobility, the Seth's have always given their dogs European themed monikers, and when a new puppy was added to the pack, he was no exception.

When the new puppy was born, the family looked closely for clues to help assist with the creation of the moniker. Immediately, the family noticed a tan spot of fur on the side of the puppy’s mouth that resembled a mustache.

"We saw that he had a mustache right away and knew that it should be the basis of his name," said Alasdair. "We built off that and the name Colonel Mustard from a well known British board game. Monsieur Le Colonel Moustache just kind of evolved from there."

Monsieur Le Colonel Moustache is now a grown adult who is incredibly smart and loves to play. The Colonel, as he’s called in short, has even learned to identify each one of his toys by name and can bring them on command.

The Seth's purchased pet insurance from Nationwide for Monsieur Le Colonel Moustache, and their other dog Lady Di, to assure that they are covered for any future medical expenses that may occur.