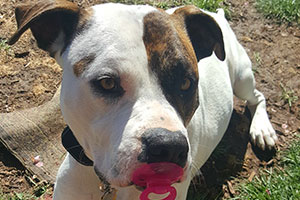 As an avid fan of Green Bay football, Monte Wheeler of Aurora, Colorado already had a theme in mind when he went searching for a dog to adopt. Knowing that he wanted a Green Bay Packers inspired "cheese head" name, Monte contemplated multiple monikers until seeing the last name Chestbrow during the credits of a movie. The alliteration gave him the idea for the name Cheesebro, and his search for a dog that matched the moniker began.

Shortly after establishing the name, Monte came across a 1-year-old American bulldog at a local animal shelter and he knew he had found a match.

"I knew I had found my dog as soon as I saw her," said Monte. "She's just a huge goofy looking dog with a big scar above her ear. She looked really happy and was super energetic. Even though she is a female, I knew she was a perfect Cheesebro."

Since the adoption, Cheesebro and Monte have become inseparable companions. Cheesebro loves the dog park and has an obsession for playing and wrestling. Cheesebro goes nearly everywhere with Monte, and at every location, people marvel at her unique name.

"I think a pet's name should suit their attributes and personality," said Monte. "I've always believed that pets should have memorable names because they’re a big part of our lives."

Monte signed Cheesebro up for pet insurance from Nationwide shortly after adopting her to ensure that she is covered for any future mishaps.