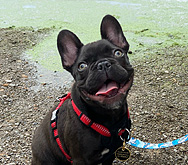 Sometimes, the best pet names just come to you. Here’s the origin story for a little spud named Dr. Potato Head courtesy of his dad, Dalton Hamilton: “I knew I wanted it to be funny. My girlfriend suggested Mr. Potato Head, and I said ‘doctor’ … because he has credentials, you know? And then we just went down the rabbit hole of all of the possible names we could call him from that.”

No surprise that Dr. P’s name has been a hit with strangers and friends alike. “Everyone usually either laughs immediately, or they ask if that is what I said—and then proceed to laugh.” It doesn’t hurt that he’s a loving, sweet boy. Dalton adds, “He loves cuddles and playing with his toys. He is very active for a French bulldog.”

Dalton was nervous when he first adopted Dr. Potato Head, so his vet recommended pet insurance to help protect against the unexpected. “I never wanted to be the person that had to ask for help … I just wanted to know that my boy was protected,” he says.